LCC falls back to even 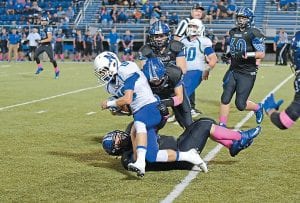 Letcher Central’s Isaiah Cornett pulled North Laurel’s quarterback to the ground, while teammate Hunter Campbell came in to help with the takedown in Friday’s 18-6 loss for the Cougars. (Photo by Chris Anderson)

The Letcher County Cougars’ record fell to 4-4 after losing a hard fought battle to defending district champion North Laurel 18-6. The LCC defense played a tremendous game, but a blocked punt and botched trick play led to 10 unanswered Jaguar fourth-quarter points that ended up being the difference in the game.

North Laurel won the toss and elected to receive but netted just 3 yards on the opening drive and was forced to punt.

Letcher Central took over at the 20-yard line and used a quick passing game to gain 2 first downs before punting the ball back to the Jaguars.

North Laurel running back Matt Sizemore fumbled the ball on the second play and LCC lineman Noah Brock came out of the pile with it to give the Cougars great field position at the North Laurel 33-yard line.

Facing a manageable 4th and 3, LCC quarterback Nick Sergent was sacked when North Laurel blitzed for a turnover on downs.

North Laurel went to the power run game to move the ball past midfield. On 3rd and 4, LCC linebacker Kyler Sturgill stayed home on a reverse to make a tackle for loss and subsequent Jaguar punt.

Sergent scrambled for a 12-yard gain on 2nd and 8. Two plays later on 3rd and 3, Sergent threw a wide receiver screen pass to Tannar Lucas who gained 6 hard fought yards for another first down. Then Preston Maggard busted a 13-yard run right up the middle. The Cougars got to the red zone but a fourth-down fade pass to Tyler Boggs fell incomplete.

On 3rd and 5, North Laurel quarterback Cole McWhorter threw a short pass to Nick Broughton who broke one tackle and raced to a 68-yard touchdown. The two-point conversion was successful and gave the Jaguars an 8-0 lead with 8:32 left in the second quarter.

Letcher Central started at its own 35-yard line after the kickoff went out of bounds. Sergent made a nifty stutter step move around a defender on his way to an 11-yard gain and first down. Then Sergent connected on consecutive short pass plays to Lucas for another first down. The drive was derailed by another North Laurel sack and the LCC punt was downed at the North Laurel 23-yard line.

North Laurel ran out the clock and took an 8-0 lead to halftime.

Letcher Central received the ball to start the second half. Maggard took a handoff for a 14-yard gain up the gut of the North Laurel defense. Three plays later on 4th and 1, Maggard carried a tackler on his back to gain just enough for the first down. The drive stalled but Garrett Sergent had an excellent punt downed inside the Jaguar 15-yard line.

On the first play after the punt Sergent threw a perfect pass to Lucas on a go route for a 39-yard touchdown. The two-point conversion was no good, but LCC cut the lead to 8-6 midway through the third quarter.

Broughton caught a 37- yard pass from McWhorter to quickly move into LCC territory. Sizemore gained 9 yards on 2nd and 6 on a run up the middle. Three plays later on 4th and 2 from the LCC 12-yard line, Sizemore bounced a run out to the right side and linebacker Tyler Isaacs made a great tackle and forced the turnover on downs.

On 3rd and long, Sergent connected with Quade Adams on a 14-yard slant pass. Three plays later after a sack, the Cougar punt was blocked and recovered by North Laurel at the LCC 4-yard line.

The LCC defense stood strong and made North Laurel attempt a 27-yard field goal that split the upright to make the score 11-6.

Tannar Lucas had a 30- yard kickoff return up the sideline just past midfield. On the first play a receiver came in motion took a handoff and attempted a pass. The trick play pass was intercepted and returned to the Jaguar 45-yard line.

North Laurel had a quick 4-play touchdown drive capped off by a McWhorter 7-yard run. The extra point increased the lead to 18-6 with 4:48 left in the game.

Letcher Central turned the ball over on downs and North Laurel escaped.

The Letcher Central defense played a great game and was led again by Avery Stamper, who had 18 tackles. Noah Brock and Triston Polly controlled the line of scrimmage and had 7 tackles each. Tyler Isaacs also had 7 tackles for LCC.

The offense never got the explosive plays it normally gets. For the game LCC ran 46 plays for only 189 yards. Nick Sergent completed 15 passes on 27 attempts for 101 yards and a touchdown and ran for another 36 yards. Preston Maggard led the Cougars in rushing with 46 yards on 9 carries. Tannar Lucas had 8 receptions for 66 yards and a score.

Letcher Central will have a bye week this week to try and regroup before playing it last district game of the year at Whitley County on October 21.