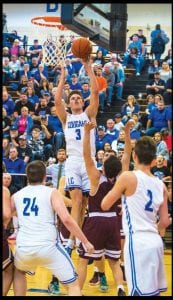 Letcher County Central’s strong finish to the 2019- 20 basketball season came to an end Saturday with the Cougars falling to region-power Hazard, 65 to 38, in the semifinals of the Boys’ 14th Region Tournament at Hindman.

The win ended LCC’s season with a won-loss record of 9-20, while Hazard (28-5) moved into Tuesday night’s region final against Wolfe County (21-9).

The Cougars advanced to the semifinal round with a 73 to 62 win over Owsley County (11-17) on March 5. Dylan Webb led LCC in that contest with 27 points, followed by 17 points for Parker Williams and 10 points for Joby Johnson. Isaiah Adams contributed nine points, Ryan Lebrun scored six points, and Bodie Bentley added four points.

The semifinal loss was the final game in their career at LCC for seniors Dicks, Lebrun, Webb, and Williams. 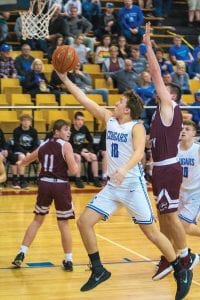 At left, Dylan Webb (3) goes up for a shot while Joby Johnson (24) and Matthew Dicks position for the rebound. Above, Ryan Lebrun glides in for a layup. (Photos by Chris Anderson)