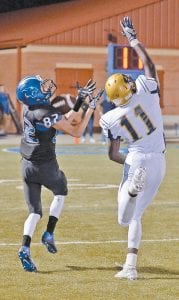 The Letcher County Central Cougars fell to 1-2 after a heartbreaking 23-19 loss to rival Hazard.

The Cougars appeared to be on the verge of beating the Bulldogs after Quade Adams caught a 25- yard touchdown pass from Nick Sergent to give LCC a lead halfway through the fourth quarter. But the Bulldogs answered with a late score of their own to notch the victory.

Letcher Central received the opening kickoff and started at its eight yard line. On third and four Adams caught an out route from Sergent for a 10-yard gain. Then Sergent connected with Tyler Isaacs on consecutive passes of 11 and 13 yards to get to midfield. The eight-play drive stalled after that and LCC punted.

Hazard took over at the 20 yard line and after two first downs, Christian Broderdorp had a tackle for loss for the Cougars. Then a pass deflection by Leyton Polly forced a Hazard punt that was downed at the LCC nine.

Preston Maggard rushed the ball three times for nine yards and LCC went for it on fourth and inches. Adams carried the ball up the middle and got stuffed, but used a second effort and bounced the run to the outside to pick up just enough yardage for the first down. Two plays later on third and six, Sergent rolled to the left and found Broderdorp open for a 17 yard gain. Then Maggard gained 13 yards on a counter play up the middle. On the next play Sergent used a play action fake to find Gage Isaacs for a 40-yard touchdown. Avery Stamper made the extra point to give LCC a 7-0 lead with 3:32 left in the first quarter. 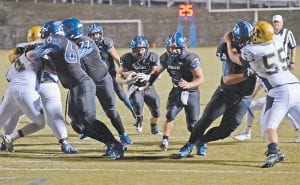 CLEARING A PATH — Letcher Central’s offensive line clears a path for Preston Maggard as he carries the ball toward the end zone. (Photo by Chris Anderson)

Hazard quickly answered with a 19-yard touchdown pass from quarterback Bailey Blair to Jason Johnson. The extra point tied the score at seven.

The Letcher Central offense went three and out, but a 43-yard punt by Garrett Sergent flipped the field to end the first quarter. Bulldog running back Cory Smith gained 25 yards on three rushes. Then on fourth and one Blair gained seven yards for a quarterback keeper. LCC lineman Cody Austin had a pass breakup to force a 33-yard field goal attempt that was made by Tyler Collins to give Hazard a 10-7 lead with 8:35 left in the second quarter.

After another three and out by the LCC offense, Smith broke off a 35-yard run up the middle to the Letcher Central eight yard line. On third down Noah Brock pressured Blair and deflected the pass to force another field goal attempt. The kick was blocked and returned by Stamper 32 yards.

LCC moved the ball into the red zone, but was intercepted by Andy Baker to keep the score 10-7 at halftime.

Hazard started at its 37-yard line after receiving the second half kickoff. Broderdorp sacked Blair for a 12-yard loss and an incomplete pass on third down made Hazard punt.

On third down, a personal foul penalty on the Bulldogs gave LCC a first down. Three plays later the Cougars were facing a fourth and four and decided to go for it. Sergent threw a perfect over the shoulder pass to Gage Isaacs for a 46-yard gain to the eight-yard line. Quade Adams capped the 11-play, 83-yard drive with a twoyard touchdown run up the middle. The extra point was blocked, but LCC had retaken the lead 13-10 with 3:08 left in the third quarter.

On the next drive Blair gained barely enough for a first down on fourth and one. The next play Blair threw a 53-yard pass to Skylar Pelfrey for a touchdown. The point after split the uprights to make it 17- 13 Hazard.

Gage Isaacs returned the kickoff to the LCC 23 yard line. On the last play of the third quarter Sergent scrambled for a 10-yard gain on fourth down for the conversion. The offense could get no farther and Garrett Sergent had a 50-yard punt.

Smith fumbled on the second play of the drive and Stamper recovered it for the Cougars at the Hazard 28 yard line.

The Cougars moved backwards after gaining a first down and went for it on fourth and 20. Sergent was pressured and threw a Hail Mary pass that was batted in the air and pulled in by Quade Adams who then ran it in for the touchdown. The score was 19-17 after the two-point conversion was no good.

Hazard recovered a squib kick at the 44-yard line. On third and nine, Johnson caught a 15-yard pass from Blair. Then Blair gained 12 yards on a quarterback keeper. Four plays later Blair threw a wide receiver screen to Johnson who scored from 13 yards away. The two-point conversion failed, leaving the score 23-19 with 3:34 left in the game.

Gage Isaacs returned the kick 39 yards to the 42 yard line. Brashears caught a 41- yard pass from Sergent on a tipped pass to the Hazard 17 yard line. Three plays later on fourth and 12 Adams gained eight yards on a screen pass. LCC turned the ball over on downs and Hazard ran the clock out for the 23-19 victory.

Letcher Central lost a hard fought game to Hazard, but had many positives to build on. Nick Sergent completed 16 passes on 25 attempts for 252 yards and two touchdowns. Gage Isaacs had a career high 98 yards on four catches and a touchdown. Quade Adams had four receptions for 48 yards and had two total touchdowns (one rushing and one receiving). Blake Brashears had 54 receiving yards on four catches and Preston Maggard had 32 rushing yards.

The defense held Cory Smith to a season low 140 rushing yards and was led by Avery Stamper who had 11 tackles, a fumble recovery and blocked a field goal. Tyler Isaacs tied for the team lead with 11 tackles and Christian Broderdorp had a sack and tackle for loss. Tyler Boggs and Leyton Polly led the secondary with five tackles apiece.

Letcher Central also improved in other areas. The Cougars had over 100 yards in penalties each of the first two games and only had five for 60 yards in the game against Hazard. They also only turned the ball over one time the entire game. The Cougars travel to Wise, VA to face Central (VA) this Friday at 7:30 p.m.