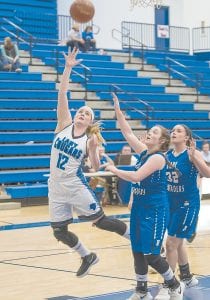 Letcher Central’s Camryn Parks puts up a shot underneath for two of her 13 points in Monday’s win over June Buchanan in the opening round of district tournament play. (Photos by Chris Anderson)

Despite the outcome of tonight’s game, both the Lady Cougars and the Lady Patriots advance to the 14th Region Tournament.

The Lady Cougars closed their final week of the regular season with losses at Pike Central and at Pikeville before beating Jenkins at home February 16 and then June Buchanan.

The Letcher Central Lady Cougars pulled away from the visiting Jenkins Lady Cavaliers after the opening quarter for the easy 73-51 victory Feb. 17, to snap a ninegame losing streak.

The Lady Cougars made 30 of 78 field goal attempts for 39 percent and claimed 48 rebounds.

Kristin Thacker and Tobulayefa Watts scored 19 points each for the 6-24 Lady Cavaliers. Watts led everyone with 19 rebounds. Jerrica Thacker scored 11 points and Lindsay Rose chipped in with four points and 10 rebounds.

The Lady Cavalier made 19 of 59 field goal attempts for 32 percent and claimed 41 rebounds.