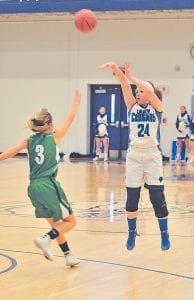 The Letcher Central High School Lady Cougars dropped back-to-back games at Perry Central on the road and at home to Jenkins last week before beating host Pike Central in overtime Sunday afternoon. The Lady Cougars then lost at home Monday night to Central High of Wise, Va., to drop their record to 5-15.

The Lady Cougars have just four regular season games remaining, with only one game at home against Breathitt County (16-5) on Friday. Letcher Central’s remaining games are at Hazard (14-8) Thursday, at Harlan County (17-6) on February 8, and at Allen Central on February 17.

Jenkins will host this season’s girls’ 53rd District Tournament the week of February 22.

The visiting Central Lady Warriors pulled away in the final quarter from Letcher Central for the 52-25 victory February 1.

The two teams struggled offensively through the first three quarters with Central managing to lead 9-5 after the first quarter and 17-12 at the half. In the third quarter, Central pushed its margin to 26-16 and steadily stretched its lead to the final margin.

Central was slightly better finishing with 16/49 field goal attempts for 33 percent and 17 turnovers.

Freshman Alyssa Franklin rebounded a miss in the final seconds of regulation and then made the tying basket for Letcher Central in its overtime victory at Pike Central January 31.

In the overtime, the Lady Cougars scored the first six points and then made 8/10 free throws down the stretch to preserve the win.

Freshman Emma Maggard finished with a double/double of 14 points and 10 rebounds and was selected as the Player of the Game.

Grayson Collier chipped in with eight points. Samantha Tubbs and Paige Caudill had four each.

Whitney Creech showed why she is the top scorer in the state as she led her visiting Jenkins Lady Cavaliers to a solid 65-52 victory over the Letcher Central Lady Cougars January 30.

While Creech may be a scoring machine, it’s too easy to overlook all the other things she does for her team — like playing every second of the game, leading her team in rebounds with 11 and dishing out three assists. The 5-9 senior, who will play next year at Western Kentucky, can be very disruptive on defense by blocking shots and coming up with steals or knocking the ball loose for someone else to grab.

Jenkins led LCC 15-12 after the first quarter before the Lady Cougars made just 2/15 field goal attempts in the second quarter and trailed 32-17 at the half. LCC played evenly with the Lady Cavs in the second half but could get no closer than eight points.

Perry Central expanded a 10-point half-time advantage into a rout in the second half, easily defeating visiting Letcher Central 73-35 January 27.

The Lady Commodores blistered the nets for 15 treys.