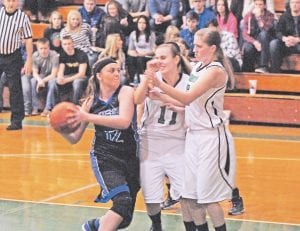 Kristina Bentley (12) looked for a shot over Alexis Stambaugh (11) and Whitney Creech during Letcher Central’s hard-fought win over Jenkins, 65-60, on the Cavaliers’ home floor. (Photo by Chris Anderson)

After a slew of postponed and/ or rescheduled games over the past few weeks, the Letcher County Central Lady Cougars lost at home 46-43 to southwest Virginia power Central High School of Wise County Jan. 29.

With the Cordia boys’ team playing last week in the All “A” Classic in Frankfort, the Cordia girls’ game at LCCHS Jan. 31 was rescheduled to Feb. 5, which will be Senior Night.

And, with an open night on their schedule, the Lady Cougars then rescheduled their Feb. 8 game at Jenkins to Jan. 31 as part of a boy/girl doubleheader and outlasted the Lady Cavs 65-60.

LCCHS travels to Hazard tomorrow night, Feb. 6, and then hosts Belfry Feb. 10. The Lady Cougars will travel to Perry County Central for a big showdown Feb. 12.

The visiting Lady Cougars used their inside strength to offset the perimeter strength of the Lady Cavs in winning 65-60 Jan. 31.

LCCHS, leading just 12- 11 after the first quarter, combined junior guard Cheyanne Stidham’s scoring and defensive pressure to shut down Jenkins’s high-scoring sophomore Whitney Creech and pushed the lead to 32-20 by the intermission.

Stidham, who is averaging 15 points per game, scored 13 of her team-high 23 points in that decisive second quarter.

Creech, who is averaging 34 ppg this season, was limited to just four second-quarter points, but recovered her shooting touch in the second half and finished with a game-high 32 points. Her secondhalf offensive performance and LCCHS’s shooting woes keyed the Lady Cavs’ comeback.

LCCHS generated just enough offense in the critical third quarter to keep the lead and led 41-34 going into the final quarter.

If the teams struggled offensively in the third quarter, that was not the case in the last quarter. LCCHS used free throws and the inside scoring of juniors Kristina Bentley and Kim Meade to offset Whitney Creech’s scoring in holding off the Lady Cavs down the stretch.

Bentley finished with 18 points and Meade with 11 — with nine coming in the last quarter. Courtney Brock chipped in with eight points and Kelly Adams finished with three. Kelli Quillen wound up with two points.

In what is turning out to be a highly desired annual interstate rivalry, Central High School of Wise, Va., survived a furious finish by the Lady Cougars in winning Jan. 29 in Ermine. Central also won last year in Wise.

The teams swapped the lead several times in the first half with Central leading 11- 10 after the first quarter and 24-20 at the half.