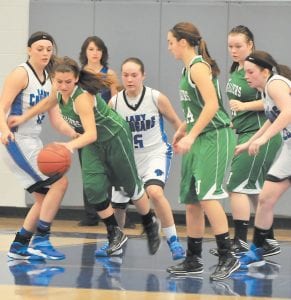 Jenkins senior Mercedes Boggs stole the ball during last Friday’s district matchup with Letcher Central. The Lady Cavaliers fell to the Lady Cougars in a close game, 58-53, after leading for portions of the game. Boggs finished with 22 points after sinking 13 of 18 free throw attempts. (Photo by Chris Anderson)

After a big district win at home Friday night over Jenkins, the Lady Cougars lost 59-43 at unbeaten (5-0) Bell County on Saturday afternoon to even their record at 2-2.

The Lady Cougars are on the road tonight (Wednesday) at unbeaten (3-0) Leslie County and then play at 4-1 Breathitt County on Friday night.

The Lady Cavs will participate in this weekend’s Smoky Mountain Classic in Gatlinburg, Tenn., beginning Dec. 19. Jenkins hosts J. I. Burton on Dec. 27.

The Lady Cougars held on down the stretch to edge visiting and unbeaten Jenkins (5-0) Dec. 13 in a key early season 53rd District match-up for both teams. This was an early season look at two different teams — LCC, which is rebuilding after last season’s regional championship, and Jenkins, which is greatly improved with the return of senior guard Mercedes Boggs. 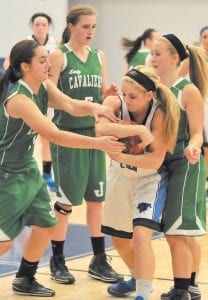 Based upon Jenkins’ win at home earlier in the week against Knott County Central, it now appears that LCC and the Lady Cavaliers may be the two teams to beat in this season’s district title chase.

LCC managed the lead by going inside to junior forward Kim Meade as she scored 12 of her team-high 20 points. However in the second quarter the Lady Cougars began to miss very makeable shots, allowing Jenkins to go on a 19-4 run and take a 31-28 lead at the half.

“We’ve struggled to run our offense this season,” said LCC coach Dickie Adams, “and that continued tonight. I was disappointed in the way we played, in our turnovers, in our lack of aggressiveness and in our inability to finish at the basket.”

Jenkins, led by Boggs at the charity line and sophomore Whitney Creech on the offensive boards, led the Lady Cavs’ 19-4 second quarter spurt that gave Jenkins the lead at the break.

Creech finished with 23 points and 12 rebounds, both game highs, despite not scoring her first basket until the 6:40 mark of the second quarter. Creech’s basket cut LCC’s lead to 24-12 and two minutes later her rebound basket cut the Lady Cavs’ deficit to 24- 18. Her basket and a pair of free throws brought Jenkins to within 28-27 with 2:20 left in the first half.

Senior Mercedes Boggs’s pair of free throws gave Jenkins its second lead of the game at 29-28 with 1:48 left in the first half. Boggs, who scored 17 points in the first half by connecting on 12 of 16 from the charity line, finished with 22 points. Her only field goal of the game pushed Jenkins’s lead to 31-28 at the half.

Jenkins continued to lead in the third quarter but junior Courtney Brock’s trey cut the Lady Cavs’ lead to 39-38 with 2:03 on the clock, and junior Cheyanne Stidham’s short runner gave LCCHS the lead back at 40-39 to end the third quarter.

In the final quarter, with the Lady Cougars battling to hang on to the lead, senior guard Kelli Quillen’s lay-up and then her dish to Brock for an easy lay-up gave LCCHS a 50-46 lead with 4:41 left to play. Quillen fouled out with 2:13 left to play and with LCCHS nursing a 52- 49 lead. Quillen provided a huge lift for her team and finished with an impressive stat line of seven points, 10 rebounds and six assists.

“Kelli and Kim (Meade) did the best job for us in that they were trying to play the way we want,” said coach Adams. “ The rest (of our players) struggled. There were some bright spots and we have to keep making improvements.”

A free throw by Brock and a lay- up by Meade provided the Lady Cougars some breathing room at 55-49 with just 1:15 left to play. Stidham’s pair of free throws with 15 seconds left put the game away. Stidham finished with 10 points, six rebounds and three assists.

Both teams shot very poorly. The Lady Cavs managed to make 17 of 62 field goal attempts for 27 percent. The Lady Cougars made 21 of 61 from the floor for 34 percent. LCCHS outrebounded the Lady Cavs 55-43 but was guilty of 17 turnovers while Jenkins made just 10 turnovers.