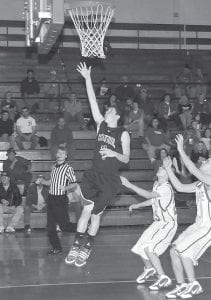 The Lady Cougars are back on the road the day after Christmas and will take on Ballard Memorial on Dec. 26 in the three-day Bourbon/ Paris Holiday Classic.

LCCHS returns home for three straight games beginning with a match-up against Leslie County on Jan. 2, followed by Knott County Central on Jan. 4, and Jenkins on Jan. 8.

The host Lady Cougars shook off their first-half cold shooting and ineffective defense woes in the second half Monday night to turn back previously unbeaten Betsy Layne. 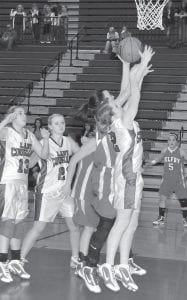 LCCHS trailed until midway of the second quarter despite a big effort on both ends of the court by senior forward Shannon Bays. Bays, who had nine points and five rebounds in the first half, struggled with foul trouble but finished with 13 points, nine rebounds and blocked three shots.

After trailing 17-13 at the end of the first quarter, LCCHS finally moved in front 21-20 on back-toback short baseline jumpers by sophomore Erica Meade — her only points in the first half. Meade finished with 12 points, four rebounds and five assists.

“Poor defense led to our bad start,” said LCCHS coach Dickie Adams. “I don’t think we could screw it up any worse than we did in the first five, six minutes. We had good shots but just didn’t finish. We got the ball into the right places in the second half and our defense became more effective.

“(Betsy Layne) was a good opponent for us and they’ve got two real nice players who caused match-up problems for us. They execute their half-court offense the best of any team in the mountains.”

Freshmen Julie Cornett and Kelah Eldridge, supported Bays’s efforts and the Lady Cougars managed to hang on for a 31-27 lead at the half.

In the third quarter, with Cornett and Eldridge continuing to hit the open shots, LCCHS extended its lead to 47-38. Sophomore Haley Whitaker’s short jumper extended LCCHS’s lead to 57-42 midway of the final quarter and Betsy Layne could get no closer. Whitaker finished with six points.

Cornett had a whale of a game off the bench substituting for both Bays and Brittany Sexton and wound up with 12 points, seven rebounds and two steals.

Eldridge finished with 13 points and four assists. Brittany Sexton wound up with eight points and Vannah Breeding chipped in with three points.

LCCHS forced 18 Betsy Layne turnovers while making only 13 — just five in the second half.

“We made too many turnovers in the first half,” said coach Adams. “We just threw the ball away to go along with our missed shots.”

After some defensive breakdowns in the early minutes that allowed Belfry to convert some easy baskets and to close to within 14-11 with 2:34 left in the opening period, LCCHS’s defensive pressure then took over the game and LCCHS extended its lead to 25-13 by the end of the opening quarter and to 41-18 by the half.

“We didn’t play very good defense at the start,” explained coach Adams. “We weren’t able to turn them over and they threw over us and made some easy baskets. We played half-court defense pretty good but I was not pleased with our full-court early. We should be better than that early and we’re just not there yet.”

From midway of the opening quarter until midway of the final quarter, when wholesale substitutions came in after LCCHS had built its advantage to 65-31, the Lady Cougars’ defensive pressure forced Belfry into 29 turnovers that resulted in 37 points off turnovers for LCCHS.

“Our defensive pressure cre- ates much of our offense,” said coach Adams, “and our depth is a big part of what we do. We felt like we got a big contribution by our bench tonight. The score allowed us to play some of our other players and our bench outscored their subs, 23-0.”

Freshman Julie Cornett came off the bench and scored eight points to lead the substitutes. Vannah Breeding and Rachel Baker added four points each and Lauren Thomas chipped in with three points. Keisha Collins and Micca Boggs wound up with two points each.

Belfry, now 2-2, was led by its All-Region performer J.J. Bevins. The junior scored eight of her team-high 18 points in the final minutes.

“We still missed a lot of shots,” said coach Adams, “but we’ll continue to work on that in practice but we looked much more organized.”