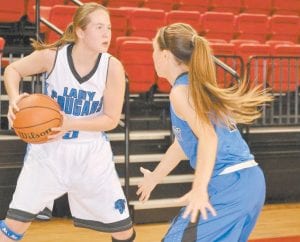 The Letcher County Central Lady Cougars won easily at Cordia last week, but then struggled in two games played in the weekend’s VA/KY Border War hosted by UVA-Wise. After out-lasting Gate City in the opener, the Lady Cougars lost to Central High in Wise, which was formed after the consolidation of the J.J. Kelly and Pound high schools.

Despite some excellent perimeter shooting and some hardnosed defense, the Lady Cougars could not overcome Central’s large free throw shooting advantage.

Despite having Courtney Brock come off the bench in the third quarter to rally her team with three treys, and Cheyanne Stidham having a career-best scoring day, LCC could not overcome the large free throw disadvantage in the end.

The Lady Cougars trailed 9-1 early, but rallied to tie the game 17-17 going into the second quarter. Central’s physical play did not result in fouls, which allowed them to pull away for a 34-28 half time advantage. With LCC trailing 47-33 in the middle of the third quarter, sophomore guard Brock came off the bench and nailed her three straight treys to put the Cougars back in the game, trailing just 47- 42 entering the final quarter. Brock finished with nine points.

Central withstood LCC’s late charge and pulled away down the stretch to remain unbeaten at 8-0. Central was led in scoring by guard Logan Reynolds’s game-high 27 points. Forward Hayley Wyrick finished with 25 points. Both girls lived at the free throw line — making more between them than LCC shot as a team. Reynolds converted eight of 10 free throws while Wyrick made eight of 11. As a team, Central converted 18 of 27 from the “charity line” while making only 22 of 56 field goal attempts (39 percent).

LCC did some better from the field, making 20 of 49 field goal attempts for 41 percent and connecting on 10 of 15 from the free throw line. Both teams pulled down 36 rebounds. Julie Cornett claimed a game-high 14 rebounds and she finished with eight points. Stidham was able to penetrate inside for pull-up jumpers while scoring a career-high 22 points, hitting on nine of 14 shots.

Kelah Eldridge and Keisha Collins finished with five points each and Vannah Breeding wound up with three points. All three were held scoreless in the second half.

Kelli Quillen finished with two points and Kim Meade with one.

Despite some questionable game officiating in this match-up of basketball-minded schools in neighboring counties and states, these two schools need to play each other annually in the years to come.

The Lady Cougars led Gate City the entire game but had to weather some missed critical free throws at the end to edge the Lady Blue Devils in the opening game of the VA/KY Border War at UVA-Wise.

Gate City managed to hit on just nine of 17 from the free throw line while LCCHS converted eight of 14 — including Kelli Quillen’s game-winning toss with less than a second remaining.

With Kelah Eldridge and Keisha Collins doing the scoring, LCC led the Lady Blue Devils 11-4 after the first quarter and 23-10 at the half. Gate City took advantage of LCC’s mistakes and poor shooting in the third quarter to pull to within 34-30 entering the fourth quarter. Gate City tied LCC, 42-42, with eight seconds left.

The Lady Blue Devils then fouled Kelli Quillen, who missed both ends of the free throws. Quillen quickly made up the missed opportunity by tipping the ball away from a Gate City player to Vannah Breeding, who then threw back to Quillen, who was fouled again with less than a second remaining. Quillen missed the first, but made the second free throw and LCC emerged with the victory. Quillen finished with four points.

Eldridge struggled with turnovers (7), but finished with a game-high 15 points, three steals and a blocked shot. Julie Cornett, quiet offensively for most of the game, scored seven of her 11 points in the final minutes to keep LCC in front. Cheyanne Stidham and Keisha Collins finished with six points each, but Collins pulled down a game-high nine rebounds and dished off three assists.

The Lady Cougars jumped to a huge early lead in winning easily at district foe Cordia on December 17.

Fueled by the insideoutside scoring trio of seniors Vannah Breeding, Julie Cornett and Kelah Eldridge, LCC ran out to a 34-7 advantage by the end of the opening quarter. All three played sparingly after that, with Breeding finishing with a game-high 13 points.

Cornett and Eldridge finished with 10 and nine points, respectively.

Emily Blair had a big second quarter with seven points, and finished with nine points.