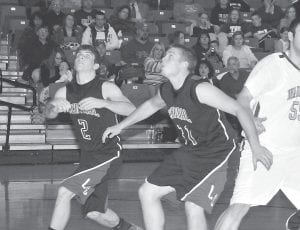 COUGARS FALL TO TEAM LED BY EX-COACH — The Letcher County Central Cougars opened their basketball season on Dec. 4 with a 61-58 loss to the East Ridge High School Warriors, who are being led this year by former Cougar Coach Raymond Justice, whose contract with Letcher Central was not renewed after last season. Above, Cougars sophomore guard Logan Johnson and senior center Ryan Brock waited for a rebound in the loss. Johnson scored 18 in the game and Brock score d one point. (Photo by Chris Anderson)

After opening its season with victories on the road last week at Harlan County and Owsley County, Letcher County Central High School suffered its first loss of the season, 59-55, Saturday against highly regarded Franklin County in the Battle of the Bluegrass in Frankfort.

The Lady Cougars will finally get to play at home when they host 2-2 Belfry Friday night. Traditionrich Belfry stumbled to a 6-21 record last year but returned everyone — including 5-7 junior guard J.J. Bevins who averaged 17 points per game last year.

“That should be a good basketball game against a much improved team,” said Lady Cougar coach Dickie Adams. “It’ll be nice to play a basketball game and not have to get on the bus. They’ve got a nice point guard in (J.J.) Bevins and they played Sheldon Clark pretty close.

“Then we’ve got a good Betsy Layne team coming in here next week before we go back on the road to Cordia (Dec. 17) and then we come back and host our tournament the week before Christmas. We’ve got a stretch here where we need to pla y well, tha t’s for sure. We need to decide how we’re going to play and to grow a little in this time before we go back on the road and play Henry Clay, Montgomery County and Breathitt County (in January). This stretch here will be a good time for us to find out if we can play a little better.”

The Lady Cougars will host highly regarded Betsy Layne Monday, December 14. The Lady Bobcats, picked in the preseason to battle Sheldon Clark for the 15th Region title come March, are led by two of the top players in the 15th Region in guards Taylor Holt and Megan Hamilton. Both are 5- 9 and good shooters. Holt, a junior, and Hamilton, a senior, averaged 17 ppg each last year in leading Betsy Layne to a 16-9 record.

The LCCHS Christmas Classic begins on Monday, Dec. 21, and is a three-day, four-team round robin invitational with June Buchanan, Shelby Valley and Powell County participating.

The host Lady Flyers, ranked 25th in the latest Herald-Leader state poll, took advantage of some easy baskets in the first quarter and again in the third quarter to build 10-point leads, and then went to the free throw line late to hold on for the victory.

LCCHS trailed 16-6 at the end of the first quarter but rallied and tied the game 24-24 at the half. In the third quarter, Franklin County took advantage of some more LCCHS mistakes for another offensive spurt for a 46-36 lead heading into the final quarter and the Lady Cougars could never catch back up.

“We gave them some easy runouts and let them build 10-point leads twice,” said LCCHS’s Dickie Adams, “and we could just never get back even after that and wound up losing by four. We had some bright spots but we saw some things we need to work on.”

With senior forward Shannon Bays in foul trouble, coach Adams went to his bench and brought in 5-10 freshman forward Julie Cornett who contributed 11 points. “Julie played very well for us during some times when we weren’t playing very well,” said Adams.

“It wasn’t our turnovers that put us in the hole. The worse thing was we gave up too many easy baskets from offensive rebounds and defensive break-downs. And, they shot too many free throws (because) we fouled so much. They shot 34 free throws and you can’t give a team 34 free throws — not in a 59-point game. We didn’t make a lot of mistakes, and we came back from 10 points down twice, but you can’t make that many mistakes on the road against a quality opponent and expect to win.”

The teams played on even terms in the second half with LCCHS holding a 59-33 lead heading into the final quarter.