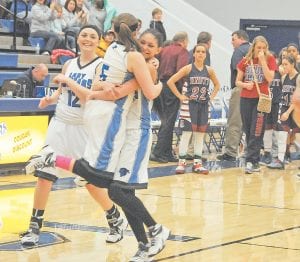 THRILL OF VICTORY, AGONY OF DEFEAT — Letcher Central’s Courtney Brock hugged teammate Cheyanne Stidham, while teammate Kristina Bentley looked on after the Lady Cougars’ championship victory over Knott Central last last week. Stidham led all scorers in the game, scoring 23 points. She was also 12 for 14 from the free throw line in the game and was named the tournament Most Valuable Player. Among the dejected Knott Central players was leading scorer Kristen Waugh (22). The Lady Cougars defeated Jackson City in the opening round of 14th Region Tournament play Monday night, 52-41. The Lady Patriots also advanced to the regionals and played Leslie County last night. (Photo by Chris Anderson)

Despite shooting just 28 percent, the defending 53rd District champions, the Letcher Central Lady Cougars, turned up the defensive pressure in the second half and then converted 7/9 from the charity line late to turn back upset minded Jackson City, 52-41, in the opening round of the girls’ 14th Region tournament Monday night in Hindman.

LCC struggled offensively all evening. The Lady Cougars led 5-0 early and 12-11 after the first quarter, but the Lady Tigers battled back and took the lead at 19-18 on Kelsey Taulbee’s trey with 3:19 left in the first half. Taulbee’s second trey gave the Lady Tigers a 22-21 lead at the break.

Taulbee’s free throw gave Jackson City a 27-24 lead with 4:21 left in the third quarter. LCC then fired up the full court defensive pressure and forced the Lady Tigers into four turnovers that led to a 13-0 run over the next three minutes, pushing LCC to a 37-27 lead with 1:05 left in the third. In that 13-0 run, sophomore Shelby Hall scored six of her team-high 17 points. Hall also pulled down five rebounds and came up with five steals. 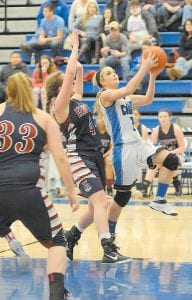 Letcher Central’s Sara Baker drives to the basket for a layup in the championship game of the girls’ district tournament last week. Baker scored three points in the Lady Cougars’ 47-41 win over Knott Central. (Photo by Chris Anderson)

The Lady Cougars led 37-32 heading into the final quarter and continued to struggle offensively. After Ashlee Combs’s free throws cut the lead to 41-36 with 5:13 left to play, the Lady Cougars turned up their defense another notch and forced Jackson City into six turnovers in its next dozen possessions. Shelby Hall’s layup with 2:01 left to play kept LCC in front 46-39.

In the final minute, senior guard Cheyanne Stidham converted six straight free throws to seal the victory. Stidham, who had 11 points in the first half, finished with 17 points, five rebounds and three steals. 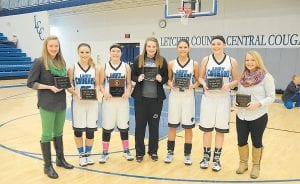 The Lady Cougars lost the rebounding battle 39-37, but won the game at the free throw line converting 17/21 shots.

LCC did a little better in the second half and wound up shooting 35 percent by making 12 of 34 field goal attempts.

KCC wound up hitting 13 of 48 field goal attempts for 27 percent.

Senior guard Sara Baker’s trey early in the final quarter pushed the Lady Cougars’ lead to 31-21 before the Lady Patriots battled back to close to within two points, 38-36, on Kristen Waugh’s trey.

Hall finished with 11 points, and Stidham wound up with a game-high 23.

Senior forward Kristina Bentley, who was injured three weeks ago, was medically cleared to play earlier in the week and contributed on both ends of the floor with seven points. Her five rebounds and three blocked shots helped the Lady Cougars win the rebounding battle 40-29.

Senior Kelly Adams and Sara Baker finished with three points each for the 15-10 Lady Cougars.