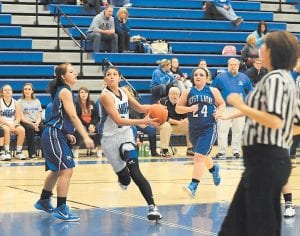 HELPING LCC GIRLS TO A WIN — Letcher Central’s Courtney Brock drove to the basket on the way to scoring two of her 17 points during the Lady Cougars’ 68-31 win over Betsy Layne on Monday. Brock was one of three Lady Cougars in double figures in the game, as teammates Kristina Bentley and Kim Meade each had 14 points on the night. (Photo by Chris Anderson)

The Lady Cougars used a smothering three-quarter-court defensive press to force Betsy Layne into 19 first-half turnovers with 11 coming in the first quarter, resulting in easy baskets.

Brock, who scored 15 points in the first half, also contributed four steals and five rebounds.

LCCHS made 29/54 field goal attempts for 54 percent, while holding Betsy Layne to 27 percent shooting on 12/44 attempts.

After an abysmal first quarter field goal shooting display, 7/21 shots from the floor, the Lady Cougars made 21 of their final 34 field goal attempts and finished with 28/55 — including 6/9 from behind the arc — for an impressive 51 percent.

Jackson City was limited to just 21/54 shooting for 39 percent.

With its early poor shooting, LCCHS led only 16-12 after the opening period, but with the shots beginning to fall, LCCHS pushed its margin out to 35-20 by the half and then blew the game apart in the third quarter, building a 56-29 lead heading into the final period.

LCCHS, now 1-1, out-rebounded Jackson City 42-26. The Lady Cougars’ 15 turnovers were more than offset by their nine steals and 17 assists — including six by guard Sara Baker. Baker chipped in with seven points.

Forward Kim Meade finished with 11 points and six rebounds and Courtney Brock wound up with 10 points — including 3/5 from behind the arc.