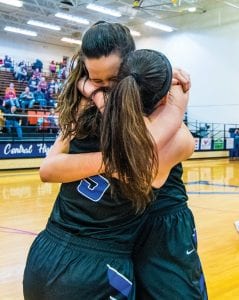 The 53rd District Champion Letcher County Central Lady Cougars will travel to Jackson on Thursday night to take on the Owsley County Lady Owls in the opening round of the girls’ 14th Region Tournament at Breathitt County High School.

The winning team will return to the Breathitt County gym at 2 p.m. Saturday to take on the winner of the late Thursday night matchup between tourney hosts the Lady Bobcats or the Buckhorn Lady Wildcats.

The Lady Cougars, now 18-9 on the season (10-3 in region play), earned the right to play 10-21 Buck- horn in Thursday night’s early game by dispatching the Knott County Central Lady Patriots in final game of the 53rd District Tournament, which was held at Knott Central.

The Lady Patriots went into the February 21 district final as the tournament favorite, having finished the regular season unbeaten in district play, including two wins over the Lady Cougars.

Things would be much different on this night, however, as the LCC held an 8 to 5 lead at the end of the quarter and a 23 to 20 lead at the half.

The Lady Cougars stumbled in the third period and entered the final frame trailing, 32 to 29. Emma Maggard and Brooke Bates scored eight and seven points, respectively, in the fourth quarter as the LCC outscored Knott Central by a whopping 25 points to 14 points to take control of the game.

LCC’s Loren Boggs connected on six of eight free throws down the stretch to help her team get the win. She and Bates led the Lady Cougars in scoring for the game, each with 12 points. Maggard and Brooklyn Collins each scored 10 points. Kaylee Banks added eight points and Jessica Boggs finished with two points. Kinzie Craft and Alyssa Franklin played but did not score.