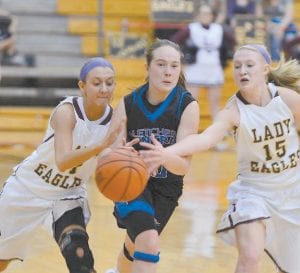 The Letcher County Central Lady Cougars took an early 2-0 lead in Tuesday night’s 14th Regional final, then never led the game again until 13 seconds were left and Vannah Breeding nailed a three-pointer under pressure to give the Lady Cougars a 41-40 win over the Perry Central Lady Commodores and the regional championship.

While not shooting as well as Monday night in the tournament held at Perry County Central High School, the Lady Cougars in the second half just would not go away and came away with the school’s second regional title and first since 2006.

PCC led 10-4 after the first quarter and 20-12 at the half. LCC held the Lady Commodores to just four points in the third quarter and closed to within 24-22. LCC tied the game at 36-36 on Vannah Breeding’s fifth trey with two minutes left in the game.

Letcher County Central made 15 of 39 field goal attempts including

The Lady Cougars will open play in the girls’ Sweet Sixteen against the 1st Region champion Marshall County, 41-39 winners over Murray Tuesday night, at 7:30 p.m., March 14, at Western Kentucky University in Bowling Green.

In leading LCC to a 15th straight win, seniors Kelah Eldridge and Vannah Breeding continued their long range shooting and the Lady Eagles, a team noted for perimeter shooting, had no answer. Eldridge, who finished with a team-high 25 points, converted 10 of 13 field goal attempts — including 6 of 6 from behind the arc. Breeding finished with 16 points — including four treys.

The Lady Eagles, who finished their season with a 25-8 mark, led for most of the first quarter by getting to the free throw line. Sophomore guard Katie Moore, who hit 13/14 from the charity line, was challenged every time she touched the basketball. Moore wound up with a game-high 35 points. Substitute Casey Stidham came off the bench to chip in with 10 points.

LCC, with both Eldridge and Julie Cornett picking up two early fouls but staying in the game, finally claimed the lead at 11-9 on senior Keisha Collins’s short jumper with 1:49 on the clock. Collins finished with six points and seven rebounds.

Leslie County took a timeout, but with the Lady Cougars hounding their perimeter shooters, the Lady Eagles had no open looks and no answers on how to get back into the game, and wound up trailing LCC 42- 27 at the half.

LCC used a 9-0 run to open the third quarter. Julie Cornett’s left hook with 6:09 on the clock gave the Lady Cougars an impressive 51- 27 lead.

Breeding’s trey with 1:51 left in the third quarter gave the Lady Cougars their largest lead of the game at 63-36.

Coach Dickie Adams pulled his starters with nearly three minutes left to play and his Lady Cougars in front 76-55.

The Lady Cougars’ 14th Regional Tournament opening round match-up with the 16-11 Lady Bobcats Feb. 27 was not supposed to have been this much of a struggle. However at regional tournament time, hanging on for the win and advancing to the next round is all that’s important.

The Lady Cougars, who had beaten Breathitt County easily twice during the regular season, struggled early in all facets of their game, and trailed 10-7 after the first quarter. Seniors Vannah Breeding and Kelah Eldridge picked up the Lady Cougars in the second quarter with their outside shooting. Breeding, who finished with 12 points, nailed three treys and Eldridge, who finished with a game-high 19 points, added a couple more treys and Letcher County Central moved out to a comfortable 28-16 lead at the half.

Despite not playing as expected, the Lady Cougars still appeared to have this game well in hand after taking a 39-26 lead into the final quarter.

Down the stretch, Breathitt County used the trey to close the gap. Kelah Eldridge’s 12-footer gave LCC a 41-27 lead with 6:17 left to play, but back-to-back treys by Breathitt County’s Stacy Cox, cut the Lady Cougars’ lead to 44-35 with 3:18 left to play.

LCC then began to take time off the clock but could not get to the foul line because the Lady Bobcats had only fouled twice in the entire second half.