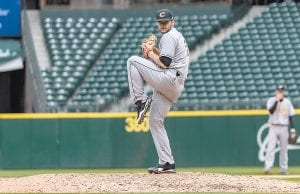 Jordan Short played a pivotal role in a pair of Centre College victories over Whitman at Safeco Field, home of the Seattle Mariners Major League Baseball team. Short picked up the save for the Colonels on March 4, allowing just one hit over the last two innings to preserve a 4-2 Centre victory. In his next appearance on March 5, Short again came on in relief and this time recorded the win, striking out four while allowing two hits over the final 4.1 innings in the 11-7 Centre win. Jordan is a 2013 Letcher County Central High School graduate. A senior at Centre, which is located in Danville, he has played all four seasons and will graduate in May. He is the son of Frank and Sandy Short of Neon.