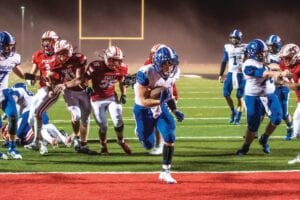 Letcher Central junior Hayden Brashear powers into the end zone with the final points of the Cougars’ road win against Perry Central in the teams’ first district game of the season. Brashear scored a touchdown earlier in the game, and also had a pair of two-point conversions. Also pictured, left to right, are Cougars Jonah Little, Hunter Hayes, Carson Adams, Scott Pack and Cody Combs. (Photos by Chris Anderson)

The Letcher County Central Cougars won convincingly by a score of 28-7 over rival Perry County Central. The win improved their record to 3-0, but more importantly, 1-0 in district play. LCC outgained the Commodores 354 total yards to 81 yards as the Cougar defense once again dominated the game.

LCC got the ball to start the game and after two penalties on second and long, running back Hayden Brashear gained 11 yards right up the middle. Quarterback Carson Adams converted a third down play with a 6-yard scramble. Isaac Matthews took a handoff around the right side of the line for a 12-yard gain. After a holding penalty, Brashear gashed the defense for an 18-yard gain. On fourth and two, Adams carried a defender and fought to gain just enough for the conversion. Reece Barnett made a circus 18-yard touchdown grab over a defender on a pass from Adams to put LCC ahead 6-0 after the extra point was no good.

Perry Central returned the kickoff to its own 41-yard line. On third down, Kaden Barnett jumped a post route to get an interception for the Cougars. 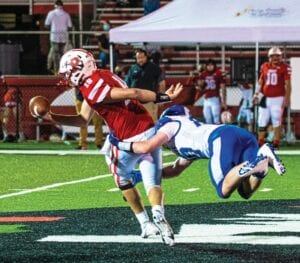 On the first offensive play, an LCC fumble gave the ball right back to the Commodores.

PCC got one first down before the Cougar defense clamped down and forced a turnover on downs.

On the last play of the first quarter Adams threw a pass for which receiver Jonah Little made a leaping grab and then broke a tackle for a 37-yard gain. That led to a swing pass from Adams to Sam Little for a 26-yard touchdown. LCC failed on its conversion attempt but still increase its lead to 12-0 with 11:22 left in the second quarter.

A perfect onside kick by Jonah Little was recovered by junior Wyatt Ison to give the ball right back to the Cougar offense.

Facing fourth and short, Adams gained 17 yards on a quarterback keeper. LCC couldn’t move the ball any further and turned the ball over on downs.

A sack by Kaden Barnett on third and long forced a punt. The line drive punt took a great bounce for the Commodores and ended up being a 55-yard punt downed at the LCC 14-yard line.

Brashear made a nifty move in the backfield to elude two PCC defenders and broke through the middle for a 40-yard gain. Adams then connected with Jonah Little on an out route for a 15-yard gain. Hayden Brashear punctuated the drive with a 22-yard touchdown run. Brashear ran in the two-point conversion as well to make it 20-0 with 2:13 to go in the second quarter.

On the first play PCC running back Jaiden Eldridge gained 20 yards on what would be the biggest gain of the evening for the Commodores. LCC linebacker Jepatha Griffith perfectly timed a blitz on third and short to get a tackle for loss. The fourth-down pass was complete but the Cougars tackled the receiver just shy of the line to gain for a turnover on downs.

The LCC offense went 3 and out and two personal foul penalties by the Cougars on the punt moved the ball to the LCC 17-yard line.

On fourth and goal PCC tight end Mason Mclarnis caught a touchdown pass and the extra point was good to cut the lead to 20-7 with 3:17 left in the third quarter.

Matthews returned the kickoff to the LCC 32-yard line. On second and 5, Sam Little took a reverse for a 21-yard gain. The Cougars gained two more first downs before trying a short field goal that was barely missed.

Linebacker Keaton Day got a tackle for loss on the first Commodore play of the drive. On third and long LCC was called for a facemask penalty that resulted in a first down. Two plays later on another third and long the Cougars were called for pass interference that gave PCC another first down. The Letcher Central defense buckled down and forced a turnover on downs.

After not being able to move the ball, Jonah Little had a 44-yard punt downed at the PCC 12-yard line to flip field position.

LCC defensive lineman Dakota Hall recovered a fumble in the Commodore backfield and LCC capitalized with a one-yard touchdown run by Adams. Brashear ran in the two-point conversion to give the Cougars a 28-7 district win.

Coach Junior Matthews said, “It was a really good way to start district play with a road win. It’s always tough to get district wins on the road. Our defense was really good, allowing less than 100 total yards of offense.”

Letcher Central dominated the game on both sides of the ball. LCC gained 354 yards of total offense. Hayden Brashear averaged over 12 yards per carry, amassing 121 yards on 10 carries and a touchdown. Carson Adams had another solid game at quarterback. He completed seven out of 14 pass attempt for 113 yards and two touchdowns with zero interception. Adams gained 67 yards rushing on 15 carries and a touchdown as well. Jonah Little led the receiving corps with 54 yards on two catches. Sam Little and Reece Barnett each had touchdown receptions.

The LCC defense was stellar as well and held the Commodores to 81 yards of total offense. Keaton Day led the defense with 13 tackles. Jepatha Griffith had 12 tackles and Kaden Barnett was all over the field tallying eight tackles a sack and an interception. Dale Webb and Cooper Bailey were constantly in the backfield getting seven and six tackles respectively. Bailey also had a sack.

Letcher Central was penalized 20 times for 230 yards compared to PCC, which had five penalties for 30 yards. The penalties hampered the Cougars much of the second half but Coach Matthews did a great job of keeping LCC composed and focused on its first district win of the season.

LCC will host district foe Harlan County in the Coal Bowl this Friday at Cougar Field at 7:30 p.m.