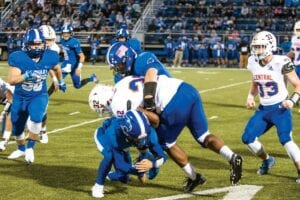 Letcher County Central’s Koby Barnette goes low while teammate Jackson Meade goes high to take down the Pike County Central ball carrier in last Friday’s 52-15 rout of the visiting Hawks. The win lifted the Cougars to a 2-0 start on the season, with the team now looking toward this Friday’s road matchup against the 1-1 Perry Central Commodores. (Photo by Chris Anderson)

The Letcher Central Cougar football team improved its record to 2-0 with a convincing 52-17 victory over visiting Pike County Central. LCC will now travel to Perry County Central for its first distict game of 2020.

Carson Adams led the way with 130 yards rushing and two touchdowns against Pike Central. Adams was also efficient passing the ball and completed six of seven passes for 75 yards and a score. The game was won in the trenches with both LCC offensive and defensive lines controlling the line of scrimmage.

Pike Central opened the game by recovering an onside kick at the LCC 43-yard line. An eight-play touchdown drive was capped off by a two-yard run by quarterback Tayvian Boykins. The extra point was good to make it 7-0 with 8:17 left in the first quarter.

Isaac Matthews had an impressive 36-yard kick return to the PCC 39-yard line. Adams gained 11-yards on a read-option play which led to a 17-yard touchdown pass to tight end Luke Goins. Jonah Little made the extra point to tie the game at seven. 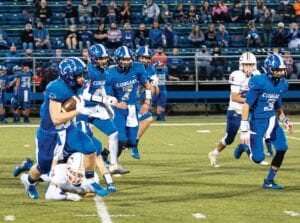 On the ensuing possession LCC lineman Jackson Meade stuffed a ball carrier in the backfield on third down to force a punt. Adams used a stutter step and then broke two tackles on his way to an 85-yard touchdown run down the left sideline. Adams also ran in a two-point conversion to give the Cougars a 15-7 lead.

On third down Meade was in backfield again, this time sacking Boykins and making PCC punt again.

Adams connected with Goins for seven yards, then found receiver Trevor Branham for a 12- yard gain. Goins made a highlight reel one-handed catch that led to a seven-yard touchdown run by Adams. Adams went up the middle for a successful two-point attempt.

The Hawks had a methodical 15-play drive into LCC territory, but the Cougars defense stiffened up to keep the score 23-7 at halftime.

The LCC defense forced a three-and-out and the one-yard punt gave the Cougars great field position. The first play was a 19-yard run around left on a quarterback keeper by Adams. On the next play, running back Hayden Brashear took handoff and scored on a nine-yard run. Little increased lead to 30-7 after his extra point. 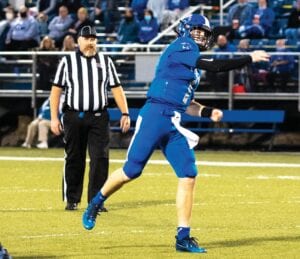 LCC quarterback Carson Adams follows through on a pass. Adams gained 130 yards on the ground and completed six of seven passing attempts for 75 yards. (Photos by Chris Anderson)

The defense forced another punt that was returned 64 yards by Sam Little for a touchdown. Adams’s two-point conversion made it 38-7.

Pike Central fumbled the kickoff return and after a scrum for the ball Branham came out of the pile with the ball for LCC. Matthews took a toss around the left side for a four-yard touchdown. The extra point split the uprights and lead was so large it constituted running clock for the remaining of the game per KHSSA rules.

After the Cougar defense forced yet another punt, LCC subbed in backup quarterback Jonah Little who wasted little time and scored from 52 yards out on the first play of the drive. The point after was good the make it 52-7.

Pike Central scored from one yard out after a 12-play drive to make the final score 52-15 after a successful two-point play.

It was an impressive performance by LCC with six different players scoring touchdowns, which shows the versatility and amount of playmakers this offense can show to opposing defenses. The offensive and defensive lines were dominating and special teams had a touchdown return and made every extra point.

Coach Junior Matthews said, “Really good all-around game. Offense, defense, and special teams all played good after a slow start. Again this week we had a lot of players get opportunities to make plays on offense. Defense forced seven punts and two turnovers.”

The defense was impressive once again and held Pike Central to only 158 yards of total offense. Jepatha Griffith had nine tackles, and Kaden Barnett had eight tackles. Sam Little had seven tackles including two for loss. Jackson Meade had six tackles including two for loss and the lone sack for LCC. Jonah Little and Koby Barnett had six tackles apiece.

LCC will travel to Perry County Central Friday to play an all-important first district game of the season. Kickoff is at 7:30 p.m.