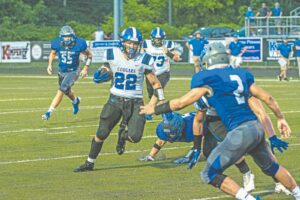 LCC’s Hayden Brashear faces down the Shelby Valley defense. Brashear had 62 yards on 12 rushing attempts in the Cougars’ 50-13 rout of the Wildcats. (Photo by Chris Anderson)

The Letcher County Central Cougars started their 2021 football season with a convincing 50-13 victory on the road at Shelby Valley.

The Cougars will go after their second win this Friday at 7:30 p.m. when they host David Crockett High School of Jonesborough, Tennessee. The Pioneers also won their first game of the 2021 campaign, defeating Sullivan East, 39-16.

Against Shelby Valley, LCC returned the opening kickoff to their own 40-yard line. On third and six, quarterback Carson Adams threw a deep ball to Trevor Branham for a 41-yard gain. Three plays later, on fourth and nine, the throw to the end zone was intercepted by Shelby Valley for a touchback.

After Wildcats quarterback Russ Osborne had a 10-yard scramble on third and six for a first down conversion, Trevor Branham, this time playing defensive back for LCC, read a wide receiver screen play and made a tackle for loss which led to a Shelby Valley punt.

After regaining possession, Cougars running back Hayden Brashear broke two tackles on his way to a 17-yard run that took the ball to near midfield. After a holding penalty, Isaac Matthews gained 13 yards on a sweep play to make it third down and seven yards to go. Adams dropped back to pass and then juked a defender on a scramble to get a first down on a 20-yard gain. Adams then threw a 12-yard pass to receiver Wyatt Ison before scoring a touchdown on the next play on quarterback keeper from five yards out. Jonah Little kicked the extra point to give the Cougars a 7-0 lead. 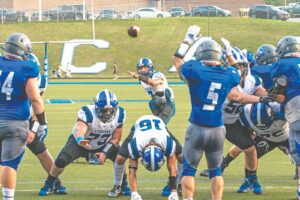 LCC recovered a fumble on the ensuing kickoff to give the offense great field position at the Shelby Valley 40-yard line. However, the Cougar offense couldn’t capitalize and turned the ball over on downs early in the second quarter.

The Wildcats were able to cut the lead to 7-6 on a drive that began with an option pass play where Osbourne found receiver Brady Bentley all alone for a 51- yard gain. Running back Jayden Newsome then punched it in for a touchdown from two yards out, but the two-point conversion attempt was unsuccessful.

Letcher Central quickly jumped to a 14-6 lead when Jonah Little scooped up the Shelby Valley kickoff on one bounce and burst through entire kickoff coverage for an 86-yard touchdown return. The extra point attempt was good as well.

After the Cougars defense forced a turnover on downs to give ball right back to the offense, Ison came in motion and took a pitch for an 18-yard gain to get the next scoring drive started. Brashear had consecutive runs of 15 and 10 yards to take the ball deep into Wildcat territory. Little capped the drive off with a sevenyard touchdown run in which the LCC offensive line dominated and provided great running lanes. The extra point was wide left this time, leaving the score at 20-7.

With the Wildcats now in possession, LCC defensive end Cooper Bailey sacked Osborne. A desperation hail Mary pass was intercepted by Wyatt Ison for a touchback to keep score 20-7 at halftime.

LCC tried an onside kick to begin second half that was unsuccessful. The Cougar defense bent but then stiffened up to force a turnover on downs at their own 11-yard line.

After a 14-yard gain by Adams on a quarterback keeper, Little took a pitch from Adams and scampered around the left side of line for a 75- yard touchdown. Adams ran in a two-point conversion to make score 28-6.

Facing fourth and eight on the next series, Shelby Valley came out in punt formation and ran a fake punt that looked like it was going to work until LCC defender Koby Johnson came out of nowhere to tackle the ball carrier two yards short of the first down.

With the Cougars now back in possession of the ball, Ison took a handoff and juked through the defense on the way to a 43-yard touchdown run. The extra point failed, butbut LCC lead was now 34-6.

After LCC kicked off to Shelby Valley, the Cougars Nicholas Haning both forced and recovered a fumble to give ball right back to his team. On fourth and five, Adams rolled left and eluded two potential sacks before finding Branham for a 26-yard gain. After a 10-yard swing pass to Matthews, Adams scored on a one-yard touchdown run. Little ran in the two-point conversion to increase lead to 42-6 and start a running clock from there.

The scoring didn’t end there, through, as Ison had an interception touchdown return and Adams threw a slant pass to Branham for a conversion to make it 50-6. Shelby Valley scored a late touchdown to make final score 50-13.

Letcher Central dominated both lines of scrimmage on way to a decisive victory.

Coach Junior Matthews said, “We started a little slow but then broke some big plays to open it up. Jonah Little and Wyatt had several big momentum plays. Our defense played well against a good quarterback in the Osborne kid. Glad to start the season with a win.”

The LCC defense was led by Keaton Day who had 14 tackles. Koby Johnson had 10 tackles and Jackson Meade had seven tackles. Cooper Bailey and Dakota Hall both had quarterback sacks. Wyatt Ison had two interceptions including the pick-six.