LCC looks to even score with Hazard 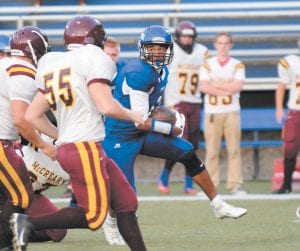 Letcher Central’s Josh Lee cuts to avoid the McCreary County defense during the Cougars’ 54-0 rout last Friday. The Cougars will host Hazard in a much anticipated rematch this week at Ermine. (Photo by Chris Anderson)

A Hazard team that edged Letcher County Central last season, 26-21, in a game in which several close calls didn’t go the way of the Cougars will visit Ermine this week.

The rematch, in which Letcher Central hopes to improve upon its 2-0 record, will take place Friday at 7:30 p.m. at Cougar Field.

The Cougars remain unbeaten after dispatching visiting Mc- Creary Central, 53-0, but must clean up their numerous personal foul and unsportsmanlike conduct penalties if they are to beat the rival Bulldogs in Friday’s muchanticipated contest.

LCC received the opening kickoff against McCreary and began its first possession at its own 15- yard line. Quarterback Zane Blair threw a 35-yard pass to Josh Lee on first down. The next play, Blair completed a wide receiver screen pass to sophomore Tanner Lucas who weaved his way through the Raiders defense for a 50- yard touchdown. The extra point was no good but 32 seconds into the game LCC had a 6-0 lead. 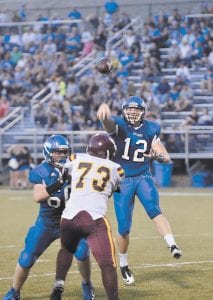 McCreary Central returned the kickoff to the 18- yard line. On third and four, an offside penalty against the Cougars gave McCreary Central a first down. After three straight incomplete passes the Raiders were forced to punt. Lee returned the punt 28 yards, but two personal foul penalties against LCC moved the ball back 30 yards to the LCC 48 yard line.

With LCC driving, defensive back Nathan Goins intercepted a pass to thwart the Cougars’ drive. On the ensuing possession the Raiders decided to go for it on fourth and one. They ran an option play, but LCC junior Jaylyn Williams tackled Gunner Perry inches short to give the Cougars excellent field position at the Mc- Creary Central 30 yard line.

Running back Hunter Hall had a 24- yard run up the middle and then bounced his next run off right tackle and beat two defenders to the pylon for a six-yard touchdown run. Blair found Lee alone in the end zone for a two-point conversion to give LCC a 14-0 lead with 6:48 remaining in the first quarter.

McCreary Central quarterback Ryan Jones was hit late on third and eight by a Cougar defender who was flagged for roughing the passer, giving the Raiders their second first down of the game via penalty. Three plays later out of punt formation on fourth down, upback James Gregory took the snap on a fake and passed to Brandon Troxell down the seam for a 28-yard gain into LCC territory. Zane Blair snuffed out a sweep play and tackled the ball carrier for a seven-yard loss. The Raiders went for the first down on fourth and 17 and Jaylyn Williams timed up a blitz perfectly and forced Jones to throw the ball away for a turnover on downs.

On second and 10, Williams took a pitch around the right side of the line and stiff armed two Raiders on his way to a 33-yard gain. Two plays later Williams had a four-yard touchdown run up the middle. Blair made the extra point to make the score 21-0 LCC.

On third and 15, Blair threw a swing pass to Hall for a 20-yard gain and a first down. A 24-yard run by Blair on a quarterback keeper brought the ball into the red zone. Two plays later Blair threw his second touchdown pass of the game to Tanner Lucas, this time from four yards out. Blair’s extra point made the score 28-0 with 11:18 to go in the first half.

Letcher Central linebacker Avery Stamper had a five-yard tackle for loss and then a holding penalty made it second and 25 for the Raiders. Two plays later, a 14-yard punt by McCreary Central gave LCC the ball at the Raiders 25 yard line.

Hall went 25 yards for a touchdown on a trap play that was blocked perfectly. The score was 34-0 after the extra point was no good.

The Letcher Central defense forced a turnover on downs. Blair connected with Lee for a 44-yard gain on a corner route. Then Jaylyn Williams scampered 27 yards for a touchdown in what would be the first team offense’s last series of the game. The extra point split the uprights and the route was on at 41-0.

At this point a running clock was instituted and Letcher Central played back-ups the remainder of the game. McCreary Central again went for a first down on fourth and 20 at its own nine-yard line, but Jones’s pass sailed out of bounds.

LCC sophomore Preston Maggard scored an 11-yard touchdown with 17 seconds left to make the score 47-0 in favor of Letcher Central at halftime.

The third quarter started the same way the first half went, with two personal foul penalties by LCC on successive plays to move the ball to the Cougar 25-yard line. On second down the pass was tipped in the air and Letcher Central defensive back Isaiah Tyree made a sliding catch to intercept the ball.

The third quarter went very quickly because of the “running clock” rule, and neither team scored points.

The fourth quarter brought the second lightning delay of the season. This one lasted about an hour and then both teams came back out of the locker rooms to finish the game.

Freshman quarterback Isaiah Bentley capped off the impressive Cougar performance with a touchdown run in the final minute of the game. The two-point conversion failed and the final score was 53-0 in favor of Letcher Central.

Letcher Central looked very explosive on offense for the second straight week. Zane Blair completed six passes on 11 attempts for 161 yards and two touchdowns. Hunter Hall and Jaylyn Williams combined for over 100 yards rushing and each had two touchdowns. Isaiah Bentley and Preston Maggard also had rushing touchdowns for LCC. Josh Lee had 79 yards receiving and Tanner Lucas had two receptions and both were touchdowns.

The defense shut out its opponent for the second consecutive week. Jacob Kiser and Avery Stamper had 4 tackles each. Isaiah Tyree and Kyler Sturgill both had interceptions for the Cougars. The defense gave up most of their yardage via penalty, racking up almost 200 yards in penalty yardage for the night.

Most of the penalties were either late hits or taunting and those must be cleaned up if they want to beat Hazard this Friday.