LCC looks to next year 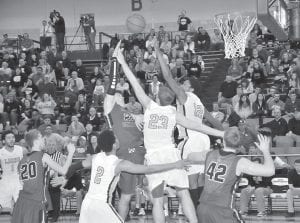 Letcher Central’s Dylan Kincer drew a swarm of Cordia defenders — Anthony Tagaloa (2), Kelly Neace (23) and Dondre Warren — in the second half of the young Cougars’ loss to the Lions in the 53rd District Tournament. Also pictured are Cordia’s Marlon King (1) and LCC’s Josh Owens (20) and Zane Blair (42). Cordia went on to finish as district runner-up to Knott Central. After defeating Breathitt County on Monday, the Lions advance to play Perry Central in the semifinals of the 14th Regional Tournament at Letcher County Central on Friday at 6:30 p.m. (Photo by Chris Anderson)

The Letcher County Central Cougars may have ended their season with a shocking loss to Cordia in the semifinals of the 53rd District Tournament last week, but once the Cougars’ fans are able to move past the disappointing end to their season and take a step back to evaluate the total season, there are a number of positive things remaining that the program can build on next season.

The number one positive is that Coach Robert Hammond will return six of his top seven players, which leads us to the number two positive, the program returns Coach Hammonds, who was recognized by his coaching peers this month as the 14th Region Coach of the Year.

Perhaps the number three positive is the program’s strong trio of assistant coaches — Brian Johnson, Jerry Bentley and Winston Lee — all of whom put in a lot of quality hours these past four months to work with developing the younger players.

And, the fourth positive is the strong parental and game-day sideline support.

Supportive parents are this program’s blessing with their transportation duties to and from practices and games and with their financial assistance. In addition, the Cougars’ program continues to benefit from the strong support provided by those who keep score and statistics and those who provide the sound.

And, tying this all together is one of the best athletic directors in the state in the person of Arthur “Oz” Jackson.

So, next year cannot arrive too soon, can it?

This was a game of two halves, with the first belonging to an energetic and efficient bunch of Cougars who played solid defense, made the extra pass and hit the boards hard and led 16-9 after the first quarter and 23-19 at the break.

That team never made it out of the locker room after the intermission.

Cordia, on the other hand, came out of the locker room and shook off an 8/31 shooting first half (26 percent), and just ran past LCCHS for quick and easy baskets.

Of the 54 second-half points scored by the Lions, only five baskets came against the Cougars’ half-court defensive set; everything else resulted from the Lions’ rebounding and beating the Cougars back down the floor for easy run-outs.

The Cougars were unable to effectively shoot from the perimeter throughout the second half against the Lions’ zone, and the bigger Lions’ domination of the boards led to numerous easy baskets.

Anthony Tagaloa and Marlon King added 14 points each, and Owootoah finished with 10.