LCC looks to regain edge in return to home 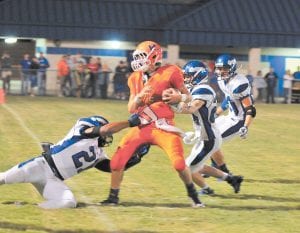 Letcher County Central sophomore defensive back Jaylyn Williams hangs on to Pike County Central High School quarterback Mac Justice during the Cougars’ loss to the homestanding Hawks in Pikeville. The Cougars will try to improve on their 2-2 record this Friday in a homecoming tilt against Sheldon Clark High School of Martin County. Kickoff is set for 7:30 p.m. (Photo by Chris Anderson)

The Letcher County Central Cougars hope their homecoming game against Sheldon Clark on Friday will put them on the positive side of the won-loss column after losing their second consecutive road game of the season.

The Cougars lost 34-21 to Pike County Central last week after having rallied to tie the game at 14 going into halftime.

The third quarter once again proved to be the Cougars’ Achilles heel as they fell behind two touchdowns heading into the final quarter. It was simply too big of a hill to climb.

The game began with Letcher Central returning the opening kickoff to its own 30-yard line. Running back Jaylyn Williams had a 15-yard run on the first play from scrimmage, but the drive stalled and LCC was forced to punt.

Pike Central running back Dakota Ray ran up the middle for 16 yards. LCC tried to stack the box on the next play and quarterback Mac Justice used a play action and found a streaking Brad Elkins for a 65-yard touchdown. The extra point was good and the Hawks quickly went ahead 7-0 with 8:49 left in the first quarter.

The Cougars started their next possession at the 41-yard line. Quarterback Zane Blair eluded a pass rush and scrambled for an 11- yard gain into Pike Central territory. On the next play Williams ran a sweep around the right side for a 26-yard gain. Hunter Hall gained 11 yards on consecutive carries to make it first and goal. The drive was capped by a one-yard touchdown run by Williams. The extra point by Dustin Holbrook sailed through the uprights to tie the game up at seven with 4:48 left in the first quarter.

Pike Central got the ball and used a wide receiver reverse pass for a 28-yard gain to get to the LCC 41-yard line. On the next play, Hunter Hall caused a fumble that was recovered by defensive lineman Jordan Boggs.

Blair connected with Hall on a 14-yard swing pass on the first play of the next possession. The next pass was slightly overthrown and Elkins intercepted the ball.

The LCC defense held strong and forced a punt to end the first quarter.

Letcher Central’s offense was stymied and Blair had a nice 43-yard punt to the Pike Central 31-yard line. Ray gained 12 yards up the middle to get a first down. Jordan Boggs shot through the line to sack Justice for a 10-yard loss. On third down LCC safety Kyler Lucas laid out a wide receiver to force an incompletion and a punt.

Blair was sacked on 3rd down and LCC was forced to punt for the third consecutive possession. A quarterback pressure by Jordan Boggs forced a 4th and 10 from the LCC 28-yard line. Pike Central went for it on 4th down and Cougar defender Stephen Fox made a great play to tackle the ball carrier just short of the line to gain to give the ball back to the LCC offense.

Blair found receiver Houston Watts on an in route for a 21-yard gain. The drive stalled at midfield and LCC punted once again. Pike Central wasted no time scoring. A long pass reception by Elkins got the ball to the LCC three-yard line and on the next play Justice found Elkins on a slant route for the touchdown. The extra point put Pike Central ahead 14-7 with 1:46 left in the first half.

Letcher Central ran its twominute offense to perfection. Blair looked so comfortable running the hurry-up that it is almost certain the Cougars will run it more often going forward. Blair hooked up with Williams for a 19-yard completion on first down. Then Blair found Watts on a crossing route for a 19-yard gain. A late hit by Pike Central moved the ball to the 35-yard line. Blair scrambled for 13 yards on a 4th and 7 play. Hall caught a screen pass on the next play and took it to the Pike Central 4-yard line. Williams got a carry up the middle and was stopped just short of the goal line. The Cougars used their last timeout with 17 seconds to play. Hall couldn’t cross the goal line on the next play and Blair alertly got the offense lined up and spiked the ball with one second left on the clock. On the last play of the half Hall scored on a one-yard run and the extra point tied the game at 14.

In the first half, Blair was seven of 16 for 89 yards and had four rushed for 34 yards. Jaylyn Williams had eight carries for 61 yards and a touchdown. Hunter Hall had 53 total yards and a score. Houston Watts had two receptions for 40 yards. Hall and Keith Boggs led the defense with five tackles apiece. Despite coming out flat LCC had to feel good about nodding the score up heading into halftime.

Pike Central returned the opening kickoff of the second to the 29-yard line. Hawks quarterback Mac Justice completed passes of 26,18, and 12 yards to get the ball to the LCC 15-yard line. On 3rd and seven Hunter Hall stepped in front of an out route for an interception and had he been able to keep his feet it would have been a 95-yard pick six.

The Cougars fumbled on the first snap and Pike Central recovered. Ray punched it in from 12 yards out and with 8:37 left in the third quarter the Hawks led 21-14.

The LCC offense had another three and out. A 28-yard pass to Elkins led to a Justice four-yard touchdown run on a quarterback keeper. Just like that LCC found themselves down 28-14.

After the Cougars turned the ball over on downs to end the third quarter, LCC’s defense held and the punt was returned to the 35-yard line. Lucas caught a screen pass for 12 yards. Then Williams took a short throw and got nice blocks from his fellow receivers to gain 44 yards. On the next play LCC Coach Mike Holcomb made the perfect call of a quarterback draw and Blair went into the end zone untouched from 10 yards out. Holbrook made the extra point to bring the Cougars within seven (28-21) early in the fourth quarter.

Pike Central started at their own 30 yard line and on the first play two Cougars had Justice in their sites for a sack, but he got away and gained 13 yards on the scramble. On the next play Justice found Andrew Fields for a 16-yard gain and a late hit by the Cougars moved the ball to the LCC 22- yard line. Two plays later Justice connected with Elkins on a slant pattern for another touchdown. The extra point was missed, but the damage was done and Pike Central led 34-21 with 6:57 left in the game.

The Cougars had an excellent drive going until a costly turnover abruptly ended it. Blair threw a perfect pass on a corner route to Watts for a 22-yard gain. Lucas gained 14 yards on a reception. Then Blair ran up the middle for a 13-yard gain to take the ball to the Pike Central 16-yard line. The Cougars fumbled on the next play and the Hawks recovered.

Jaylyn Williams exemplified the never-give-up attitude Holcomb instills in his players and teams. On the first play of the Pike Central drive, Justice broke free on a run around the right side. He appeared to be heading for a 86-yard score, but a hustling Williams not only caught him from behind but also stripped the ball and recovered it at the LCC five-yard line with 2:18 left.

The Cougars eventually gave the ball up on downs and lost the game 34-21 to Pike Central.

Letcher Central, now 2-2 on the season, never appeared to be into the game — perhaps because of an emotional letdown after the tough loss at Hazard on September 13. The Cougars need to regroup and get a win Friday.

The Cougars only had one sack and one tackle for loss on defense and Blair was constantly pressured with the Hawks only rushing three and dropping eight into coverage. Blair finished the game 19 of 39 for 232 yards and had 82 yards rushing on 14 carries and a touchdown. Jaylyn Williams had 136 yards of total offense and a score. Houston Watts had 4 catches for 75 yards and Kyler Lucas had four catches for 50 yards.

Senior Keith Boggs who had nine tackles led the defense. Hunter Hall had eight tackles a forced fumble and an interception. Kyler Lucas had six tackles and Jordan Boggs had the only sack for the Cougars.

Kickoff for Friday’s homecoming game at Ermine is 7:30 p.m.