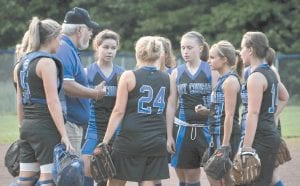 After falling behind 4-0, the Letcher County Central Lady Cougars refused to go down without a fight against Jenkins Tuesday in the finals of the 53rd District softball tournament, but still ended up losing to the heavily favored Lady Cavs, 8-7.

Both teams will move ahead to regional competition.

The Lady Cougars advanced to Tuesday’s final on Monday, when junior pitcher Adiah Cook tossed a perfect game leading Letcher Central to a 15-0 win over Knott County Central in the opening round of the tournament.

The Lady Cavs, now winners of 10 straight, moved into the final game by beating Cordia in their opening game, 19-0.

The Lady Cougars finished their regular season last week with a doubleheader sweep of Harlan Independent, 10-0 and 15-9.

In the first game, the Cougars jumped out to a 2-0 lead when pitcher Cook got on base with a single to left and scored on double by junior Chloe Wynn. With two outs, sophomore Amelia Shepherd singled to center to score Wynn.

Leading 5-0 in the top of the fifth, Letcher County started to blow the game open after senior Litisha Potter singled to right and moved to second on sophomore Annie Boggs’s walk. The next batter, senior Katey Mynster, singled to center to score Potter and move Boggs to third. Freshman Emily Blair knocked in Boggs on a fielder’s choice to second. Cook walked and Mynster scored when Wynn hit the ball to the shortstop, who couldn’t get Cook out at second.

Junior Lisa Frazier followed with her second double of the game, knocking in Cook and Wynn to push the lead to 10-0. Annie Boggs knocked in Frazier and Micah to finishing the scoring.

Harlan got one run on three hits.

Coach Bumper Adams gave the ball to Micah Boggs (6-0) in the second game, which saw the Lady Cougars jump out to an 8-0 lead in the top of the first.