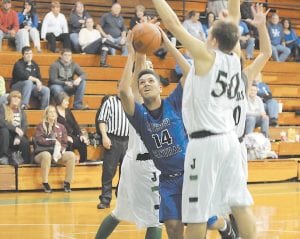 COUGARS DEFEAT CAVALIERS — Letcher Central’s Isaiah Wallace powered his way to the basket through the Jenkins defense during the Cougars’ 85-59 win at Jenkins on January 29. Wallace chipped in three points in the game for the Cougars. (Photo by Chris Anderson)

The Letcher Central Cougars (13-8) secured second place in the 53rd District standings with their victory last Thursday at Jenkins.

Despite a subpar effort by sophomore Torell Carter, at least subpar for him as he finished with only 12 points, the host Cougars out-fought, outhustled and outscrapped the visiting Knox Central Panthers in winning 80-74 Saturday night, Jan. 31.

In a game which featured more fouling by the players than defensive pressure, the Cougars took advantage of the fouls to get to the free throw line where they feasted — making 26/35 foul shots including 15/15 by junior guard Jordan Gregory. Gregory finished with a game-high 25 points including eight-for-eight late in the fourth quarter with the game on the line.

Sophomore guard Austin Caudill fueled the Cougars early with his outside shooting as LCCHS led the Panthers 27-22 after the opening quarter. Caudill wound up with 11 points — all in the first half.

After scoring eight points, Torell Carter picked up his third foul and went to the bench with 3:05 left in the second quarter and LCCHS up 40-32. The Cougars, instead of dropping their heads, just refused to quit. With Carter on the bench, Gregory took over the game with his penetrating drives and short jumpers and LCCHS closed out the second quarter with a 7-2 run for a 47-34 lead at the half. Gregory had 13 points in the first half.

The Cougars struggled offensively early in the third quarter with Carter picking up his fourth foul at the 4:19 mark and LCCHS leading 51-39. If possible, the Cougars began playing even harder. Gregory’s trey got the offense rolling and junior forward Tyler Collins’s layup at the buzzer pushed the Cougars’ lead to 60-49 after three quarters.

Collins really stepped up his game in the second half and finished with 18 points.

With the ball handling shaky early in the fourth quarter, Carter returned to settle down the offense but picked up his fifth foul at the 3:42 mark and left with 12 points and the Cougars clinging to a 66-59 lead.

Not to worry, however, because Gregory held off the Panthers down the stretch with his perfect eight-foreight shooting from the foul line.

The visiting Letcher Central Cougars placed three players in double figure scoring in winning easily, 85-59, at district rival Jenkins on January 29. The victory raised the Cougars’ record to 12-8 but, more importantly, secured the Cougars second place in the district standings with a 3-3 mark heading into the 53rd District Tournament the week of February 23. The Cougars host the district tournament this year, and as the second seed and playing at home, stand a very good chance of reaching the 14th Regional Tournament in March after an absence last March.

The Jenkins defense was unable to contain the Cougars’ three-guard offensive attack with Torell Carter finishing with a game-high 25 points. Sophomore Austin Banks scored 17 and junior Jordan Gregory chipped in with 15.

In a contest rescheduled to January 28, the visiting and regional topranked

The Cougars struggled offensively early and trailed 18-5 after the first quarter, but then used balanced scoring to rally in the second quarter and trailed the Patriots just 30-29 at the half.

Led by their outside/inside All- State trio combination of senior guard Cameron Justice, center Evan Hall and senior forward Simon Christian, the Patriots began to pull away in the second half and led the Cougars 46-35 going into the final quarter.

The Patriots converted 11/13 from the charity line while the Cougars were 10/13.