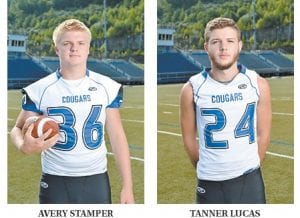 The 2016 Letcher County Central football season opens up Friday night at home against a Pike County Central team the Cougars defeated by a score of 49-34 last season.

New head coach Junior Matthews takes over the LCC pro- gram after former coach Mike Holcomb retired in the offseason. Matthews will also serve as defensive coordinator and has installed a new 4-3 defense to get more defenders in the box with emphasis on stopping the run.

“We will work hard and I just want us to be the best versions of ourselves every week,” said Matthews.

New offensive coordinator Matt Chandler will run a fast tempo spread offense similar to the one the Cougars ran in previous years.

LCC is coming off a 4-7 season, but will look to improve on that record with an experienced roster featuring a talented 13 man senior class. The quarterback will be sophomore Nicholas Sergent. Seniors Quade Adams and Preston Maggard will get the bulk of the carries from the running back position. Speedster Tanner Lucas, who had 10 touchdown receptions last season, will lead the receiving corps. The offensive line should be one of the strengths of the team since it has four returning starters in seniors Alec Fields, Triston Polly, Dakota Trotter and Noah Brock.

The signal caller of the defense will be senior linebacker Avery Stamper who is coming off a 150-tackle season. Triston Polly will anchor the defensive line along with Noah Brock. The coaching staff also expects big things out of senior outside linebacker Tyler Isaac among others.

LCC recently won two sevenon seven passing tournaments as a result of all the conditioning work and practice done in the summer. They bested a field of 12 teams at Pikeville and nine teams at South Laurel.

“Winning those built team chemistry and the communication between the coaches and us was strengthened too,” said Tannar Lucas.

The Cougars will try to build on this recent momentum as they face Pike Central and new coach Eric Ratliff this Friday night at Cougar Field.