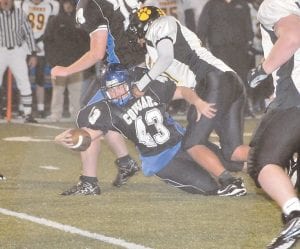 REACHING FOR YARDAGE — Freshman running back Sam Sergent gets wrapped up and stretches for yardage in the Letcher County Central Cougars’ win over Clay County. (Photo by Chris Anderson)

Coming off an impressive victory over Whitley County last weekend, the Cougars hoped to continue their winning ways against a struggling Clay County team. The Tigers have really been in hard times with the loss of their starting quarterback a couple weeks back. It would be no easy task for the Tigers against a surging Cougar team.

The Cougars were tied for first in the district, and if they were to win their last two games against Clay and North Laurel they would host a first round playoff game at Ermine. The loss at Harlan County really hurt the Cougars, but the win at Whitley was a big shot in the arm.

At 5-2 overall and 2-1 in district play, the Cougars were ready to play some football, and, man, were they ready.

The Cougars received the opening kick and Jesse Rose returned it out to the Cougar 38-yard line. It took one play, as quarterback Logan Johnson hit Dustin Brown with a pass and he was off for 62 yards and a quick 6-0 Cougar lead. McKenzie Smith added the point after and it was 7-0. The touchdown was Brown’s eighth on the season and second through the air.

After holding the Tigers on their first possession and forcing a punt, the Cougar offense was back on the field. Johnson quickly picked up 26 yards on a keeper to the Clay 40-yard line. He found Jesse Rose later in the drive on a pass to the Tiger 5-yard line, and a first and goal.

Johnson then hit Chase Adams with a short pass for the next Cougar score from 4 yards out, and the score was 13-0 with 8:17 in the first quarter.

Clay County struck back almost as quickly. After returning the kickoff to the 32-yard line, Josh Wilson hit the line, bounced off and took the ball around the end to go 68 yards for the Tigers’ first score of the night.

The 2-point conversion was also good and it was 13-8 Cougars with 7:59 still left in the opening quarter.

The Cougars’ special teams that have struggled holding on to the ball all season, once again had problems on the ensuing kickoff. The ball was fumbled by Rose and the Tigers recovered on their own 43-yard line. The drive by the Tigers resulted in a punt, but it was highlighted by a Ryan Hall tackle on Josh Wilson that brought the crowd to its feet.

The Cougars started the next drive at the 14-yard line and Greg Collins wasted no time as he picked up a big first down out to the 43-yard line of Clay County. Johnson hooked up with Rose again on a long pass down on the Tiger 4, and Rose got the honors and the touchdown. The Cougars led 21-8 after Johnson bulled his way in for the 2-point conversion with 1:17 in the first quarter.

The game really started to get out of hand as the overmatched Tigers had no answer for the highpowered Cougars.

The next Tiger drive ended in disaster. McKenzie Smith came up with a 15-yard sack, and Koree Stewart knocked the ball out of the quarterback’s hand for the Cougars to recover on the Tiger 35- yard line.

Greg Collins took off on the first play and went all the way to the one-yard line, and Dustin Brown scored his second touchdown on the next play. Robbie Huff scored the conversion on a pass play and the score ballooned to 29-8 Cougars.

The Tigers answered on the next drive and scored on a pass play, but it was called back on a penalty and the Tigers eventually had to punt.

The punt was fumbled again by the Cougar special teams and the Tigers recovered, but a penalty on the Tigers forced them to have to punt the ball a second time, and they lost a big momentum shift.

This time Chase Adams returned the ball to the 40-yard line. The Cougars were not able to mount a drive, and they were forced to punt.

The Cougar defense also forced the Tigers to punt, and on the next play from scrimmage, Johnson hit Brown with a little screen pass and he took it to the house for his third score of the night. The conversion by Johnson made it 37-8 at the half.

The second half brought a little spark to the Tigers on their first series, and they scored on a quick 70-yard run by Reid to make the score 37-14. The celebration would end quickly as Logan Johnson answered on a 64-yard quarterback keeper and a 45-14 Cougar lead after Huff scored the conversion.

After forcing another Tiger punt, the Cougars added to their total again. With the ball at the 45- yard line, Johnson hit Brown with another screen pass and he followed his blockers all the way to the end zone for the touchdown. The score was 52-14 with 7:59 in the third quarter.

The Tigers answered again on a trick play that fooled everyone, as Dezarn scored on a reverse and added on another score to the Tigers’ total to make it 52-20. But that would be it for the scoring as a lot of fresh faces played the fourth quarter, and the Cougars racked up another big district win.

They completely dominated the Tigers with the exception of a few big breakaway plays by Clay County. The Cougars had 516 yards of total offense. Logan Johnson was amazing with 285 yards through the air on 10-14 passing with 4 touchdowns. Dustin Brown was the receiver on three of those.

Johnson again led the way on the ground with 99 yards, followed by Greg Collins with 69 yards. The Cougars rushed for 231 yards on 17 attempts.

The Cougars will now get ready to take on North Laurel at home as they close out the regular season. Things were really shaken up in the district Friday night, as Harlan County overcame a 14-0 deficit to beat Perry Central 15-14 and remain tied with the Cougars for first place in the district race.

If Perry beats Whitley County this week things will really get crazy. But if the Cougars take care of business at home against North Laurel, they will be fine.