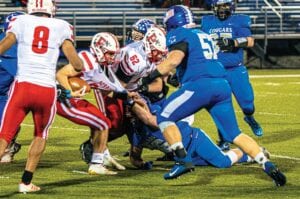 Letcher Central’s Keaton Day grabs hold of a Perry Central jersey as teammate Jepatha Griffith moves in to finish the tackle in LCC’s opening round Class 4A playoff win. The 39-0 win is the team’s most lopsided victory of the 2020 season. (Photo by Chris Anderson)

Letcher County Central advanced to the second round of the playoffs with a 39-0 victory over rival Perry County Central. Hayden Brashear had three rushing touchdowns to lead the offense and the LCC defense had a dominating performance forcing five turnovers.

Letcher Central got the ball to start the game but was quickly forced to punt.

Perry Central moved the ball down to the LCC 34-yard line. On first down LCC defender Sam Little blitzed around the edge and forced a fumble while sacking the quarterback, that was recovered by defensive lineman Dakota Hall to stop the scoring threat.

After another Cougar punt and LCC linebacker Jepatha Griffith recovered a fumble deep in Commodore territory.

The LCC offense quickly capitalized with a four-yard touchdown run by Hayden Brashear to give the Cougars a 6-0 lead after the two-point conversion attempt was no good.

On the ensuing drive, a sack by Dale Webb forced a fourth-and-long, but on the punt the Cougars roughed the punter to give PCC an automatic first down. Three plays later Reece Barnett intercepted a pass to give LCC the ball at the Commodore 37-yard line. 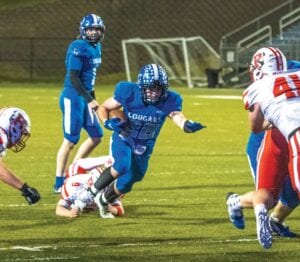 Hayden Brashear shakes a tackle on a rushing attempt after receiving a handoff from quarterback Carson Adams, pictured in rear, in the Cougars’ opening round playoff win on Friday. The Cougars scored on the drive and went on to rout visiting Perry Central, 39-0. (Photo by Chris Anderson)

On the second play, quarterback Carson Adams faked a bubble screen pass and then threw a perfect deep ball to receiver Alex Blair for a 40-yard touchdown to increase the lead to 12-0.

The LCC defense forced a Perry Central punt and the LCC offense overpowered the Commodore defense. The drive started with an Isaac Matthews 21-yard run up the middle. Two plays later Sam Little had a 33-yard run which led to a six-yard touchdown run by Brashear to make it 18-0 after the two-point attempt failed.

The LCC defense made PCC punt once again and Adams completed a pass to Sam Little on the first play for a 78-yard touchdown to make it 24-0 at halftime.

Perry Central received the ball to start the second half. On third-and-seven, LCC defensive lineman Cooper Bailey sacked the quarterback to force a punt. The Cougar offense got one first down before punting the ball back to PCC.

On the first play of the drive a quarterback pressure forced a fumble that was recovered by Dakota Hall at the PCC 20-yard line. Brashear punched it in from five yards out for his third touchdown of the game. Brashear also scored on the two-point conversion to make it 32-0 early in the third quarter.

After a Commodore punt the LCC offense went on a methodical 16-play drive but eventually turned the ball over on downs at the PCC 15-yard line.

Perry Central went for the first down on fourth-and-four but a sack by Keaton Day on a blitz up the middle stopped the drive.

With LCC back in possession of the ball, running back Koby Johnson took a handoff around the left side of the offensive line for a 32-yard touchdown. The extra point by Joseph Grubb was good to give the Cougars a 39-0 lead and start a “running clock” for the remainder of the game.

The Cougars scored once more when LCC defensive back Koby Barnett intercepted a pass to ensure a shutout and a final score of 39-0.

Letcher Central dominated the game in all facets, especially the offensive and defensive line. LCC ran the ball at will on offense and had constant quarterback pressure on defense, accounting for five sacks and also forcing five turnovers.