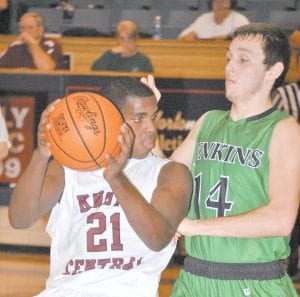 The last week was a rough one for the Letcher County Central Cougars. After the team’s unbeaten streak was ended at six in a tough loss at Perry County Central December 18, the Cougars won their opener in the People’s Bank Classic before dropping their second game later last Friday to host Madison Southern. On Sunday, they lost to South Laurel.

An experienced South Laurel team was deeper and better equipped to handle the threegames in-two-days holiday tournament format and defeated a tired Letcher County Central in the third and final game of the People’s Bank Classic in Berea.

The Cardinals (5-6), led by 6’3” sophomore guard Zac Baxter’s game-high 22 points, cruised through the first half and then withstood a third quarter challenge by the Cougars. The Cardinals led LCC 11-4 after the opening quarter and 24-14 at the half. The Cougars closed to within 38- 34 by the end of the third quarter, but ran out of gas down the stretch and could get no closer. 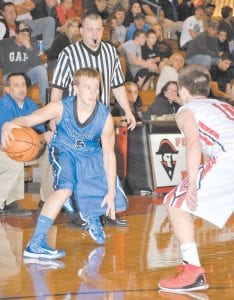 The Cougars bounced back from a disappointing loss at Perry Central earlier in the week to defeat Sayre in their opening round match-up in the People’s Bank Classic at Madison Southern High School in Berea.

The Cougars used the inside strength of Josh Owens and Zane Blair to outscore the Spartans 21-9 after the half and take control of what had been a close game.

LCC led 12-3 after the first quarter, but Sayre closed to within 17-15 by the half. Josh Owens and Zane Blair then took over in the paint, helping to extend the Cougars’ lead to 38-24 entering the final period.

Blair, a 6’4” sophomore, led everyone with 17 points. Owens added 15 points. Sam Robinson chipped in with five points and Chippy Frazier finished with four points. Cody Gregory and Max Hall wound up with two points each for the 7-1 Cougars. Sayre, which fell to 2-6, was led in scoring by Ray Davis’s nine points.

In their match-up in Hazard earlier last week, the host and once-beaten Commodores weathered a determined effort by the Cougars.

Perry Central, with two of the region’s best players in big center Dalton Cornett and slick freshman guard Braxton Beverly, out-hustled the relatively inexperienced Cougars to take a commanding 19-5 lead on Beverly’s trey with 1:10 left in the first quarter. The Commodores built their lead on 11 points from Cornett and four turnovers and a poor rebounding effort by the Cougars. Cornett finished with a game-high 23 points. Beverly wound up with 16.

The Cougars, who trailed 21-9 after the first quarter, sagged back into the middle to shut down Cornett, and then hit the boards in the second quarter and closed to within 24-19 on Sam Robinson’s short jumper at the 4:35 mark. Robinson’s trey pulled the Cougars to within 31-26 by the break. Senior guard Cody Gregory, who scored five of the Cougars’ first nine points, consistently broke down the Commodores’ defense to set up teammates. Gregory scored seven points in the first half and finished with a teamhigh 14 points.

Instead of folding up and just playing out the game, juniors Josh Owens and Cody Gregory scored the next six points. The Cougars were back in the game and trailing just 44-39 heading into the final quarter. Owens would up with eight points and led the Cougars with eight rebounds.

Junior guard Chippy Frazier, who had four points in the first half and finished with 12, hit a trey to cut PCC’s lead to 50-47 with 4:28 left to play. With 3:50 left, Gregory’s lay-up cut the Commodores’ lead to 50-49. Frazier then hit a pair of pressure free throws with 1:42 left to cut PCC’s lead to 53-51, but the Commodores then were able to go back inside to Cornett for a short turn-around to expand the lead to three. The Cougars missed on their next two trips down the floor and the Commodores escaped with the victory.

LCC won the rebounding battle, 21-20, and forced PCC into 13 turnovers while making only eight themselves — including none in the final quarter.

The home-standing Cavaliers mounted a strong fourth quarter rally against Cordia on December 19, but the Lions hung on down the stretch for the victory.

With newcomer Gia Tagaloa leading the way offensively, the Lions jumped out to a commanding 16-6 lead over cold-shooting Jenkins. The Cavs found their range in the second quarter and, led by senior forward Koty Sexton, closed to within 33-31 at the half. The shooting woes returned in the third quarter as Jenkins fell behind and trailed 54-44 heading into the final quarter. As happened in the second quarter, the lid came off the basket and the Cavaliers nearly pulled the game out in the final minutes.

Tagaloa led the Lions with 26 points.

The host Patriots remained unbeaten with an easy victory over the Cavaliers on December 17.

Knott Central, the defending 14th Regional champions, exploded out of the gate and built a commanding 28-5 lead by the end of the first quarter, and led 52-13 at the break. KCCHS led 66-27 after three quarters.