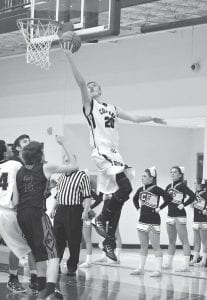 Letcher County Central’s Josh Owens (20) went for a reverse layup during the Cougars’ win over Prestonsburg on Saturday. The Cougars will play at home Thursday and Friday. (Photo by Brandon Meyer)

The 10-6 LCCHS Cougars, who had won six of their last seven games going into last night’s visit to Knott County Central, return home for back-to-back games tomorrow night, Jan. 16, against Pikeville (5-9) and against June Buchanan School (2-10) on Friday night, Jan. 17.

With the victory, the Cougars extended their winning streak to five straight and improved their overall mark to 10-6.

Prestonsburg stayed close in the first quarter but then senior Josh Owens and Chippy Frazier took over. Owens finished with a game-high 27 points, six rebounds and two blocked shots. Frazier chipped in with 18 points.

LCCHS expanded its 25-18 margin after the first quarter to 50-28 by the half. The Cougars lead was 66-45 entering the final quarter.

The Cougars used some fullcourt first quarter defensive pressure and then a “chaser” on the Cavs’ high-scoring junior guard in the second quarter to totally disrupt Jenkins’ play in winning easily Jan. 10.

LCCHS’s defensive pressure in the first quarter forced Jenkins into 12 turnovers that led to easy baskets and a 24-5 lead after the first quarter. “Chasing” Potter in the second quarter kept the ball out of his hands, and LCCHS pushed its advantage to 45-13 by the half.

Potter, who was averaging 14 points per game, was limited to four first-half points but finished with a team-high 16.

The visiting Cougars won their third straight, a 59-28 district win at JBS Jan. 8, behind the scoring of the senior duo of Josh Owens and Chippy Frazier.

Owens finished with a gamehigh 20 points — including 8/10 from the charity line for the 8-6 Cougars. Frazier finished with 13 points.

LCCHS jumped out to a commanding 27-9 advantage and increased the margin to 45-15 at the break and 57-18 entering the final quarter.