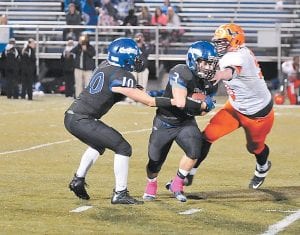 Letcher Central quarterback Nick Sergent handed the ball off to Quade Adams during the Cougars’ 58- 25 loss to Union (Va.). The defeat wrapped up the regular season for the Cougars, who finished with a 4-6 record and will face Pulaski in the opening round of the state playoffs. (Photo by Chris Anderson)

The Letcher County Central Cougars finished the regular season with a 4-6 record after a 58-25 loss to undefeated Union (VA). LCC will travel to top seeded Pulaski County in the first round of the playoffs Friday.

LCC won the coin toss and elected to receive the ball to start the game being played last Friday at Ermine. On third and six, runningback Quade Adams took a handoff and gained 32 yards up the middle to the Union 40 yard line. On third and three, quarterback Nick Sergent threw a strike to Tannar Lucas for a 33-yard touchdown. Dustin Holbrook connected on the extra point to give the Cougars a 7-0 lead with 9:28 left in the first quarter.

After Union moved the ball to LCC territory, Cougar defensive back Christian Broderdorp tackled the carrier for an eight-yard loss to force third and 18. Tannar Lucas sacked Bear quarterback Bryan Spears to force a punt that was downed at the LCC 16 yard line.

Quade Adams had a 24-yard run on the first play of the drive. The drive stalled there and LCC punted for the first time of the game.

Union drove the ball to the LCC red zone and kicker Devin Simon made a 36 yard field goal to cut the Cougar lead to 7-3.

On second and five, Adams used a spin move for an 18-yard gain to the Union 43 yard line on the last play of the first quarter. On third and eight, Sergent dropped back to pass and was sacked. The Cougars had to punt with 9:48 to go in the second quarter.

Union scored quickly on a 35- yard pass from Spears to receiver Rashawn Nokes. The extra point split the uprights to give the Bears their first lead of the game 10-7.

Gage Issac returned the kickoff 57 yards to regain momentum for the Cougars. Adams had a 11-yard run and then two plays later burst through the middle of the line for a 19-yard touchdown run. The extra point was no good to keep the score at 13-10.

An intentional grounding penalty on the Bears made it third and 23. The third down pass was incomplete and the subsequent Union punt was downed at the LCC 32 yard line.

The Cougar offense moved backwards via penalties and had to punt from inside their own 10 yard line.

Spears pumped to the right side and found Jake Barnett on a seam route for a 20-yard touchdown. The point after gave Union a 17-13 lead with 3:35 to go in the first half.

The LCC offense went three and out to give the ball quickly back to the Union offense.

Union capitalized with a Braxton Bishop rushing touchdown. The extra point was no good for a score of 23-13.

Union recovered a LCC fumble on a running play and scored their third touchdown in less than three minutes on a 13-yard pass from Spears to Bishop. The point after made it 30-13 heading into halftime.

Union returned the second half kickoff to the 36 yard line. The Cougar defense forced the first three and out of the game and Tannar Lucas returned the punt to the LCC 28 yard line. On third and two, Adams used a nice second effort to gain just enough for a first down. Then Sergent threw an out route to Lucas who turned it up the field for a 24-yard gain. On fourth and six, Sergent connected again with Lucas for an eight-yard touchdown. The two-point conversion attempt was no good but LCC cut the lead to 30-19 with 7:31 in the third quarter.

Spears ran a quarterback draw and broke two tackles for a 71-yard touchdown. The score was 37-19 after the extra point was made.

After a 14-yard Quade Adams run, the drive stalled and a short LCC punt was downed at the 40 yard line. On the third play, Spears threw an eight-yard touchdown pass to Nokes. The point after made it 44-19.

Tannar Lucas made a spectacular catch on a Sergent pass and ran for a 62-yard gain. Then Adams ran up the middle for a three-yard touchdown for a 44-25 score once the two-point conversion was unsuccessful.

LCC tried an onside kick but could not recover and Union started the drive near midfield. On third and 20, Spears hooked up with Jake Barnett for a 32-yard pick up. Three plays later Union scored on a one-yard touchdown run to make it 51-25.

Letcher Central could get nothing going on offense and punted back to the Bears.

Braxton Zurkel had a 46-yard touchdown run down the left sideline and the point after increased the lead to 58-25 with 6:26 to go in the contest.

On fourth and 22, Sergent threw a pass to Lucas who was stopped just short of the line to gain for a turnover on downs. Union ran the clock out.

The Cougars made a valiant effort against the undefeated Union Bears but fell short by a score of 58-25. LCC had a 13-10 lead with 3:36 left in the first half but gave up three touchdowns before halftime in what proved to be the turning point of the game.

Quade Adams had the best game of his LCC career, carrying the ball 19 times for 206 yards and two touchdowns. Nick Sergent completed eight passes on 15 attempts for 169 yards and two touchdowns, with all of the completions going to Tannar Lucas. The Cougars will look to bounce back when they travel to Pulaski County this Friday in the first round of the playoffs.