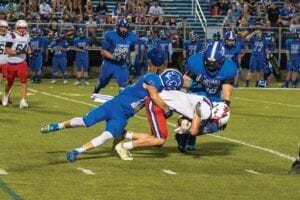 Letcher County Central defensive back Wyatt Ison wraps up a Rockcastle County ball carrier as teammate Jepatha Griffith moves in to assist in the Cougars’ 27-8 season-opening win last Friday at home. The Cougars will host Pike Central this Friday. (Photo by Chris Anderson)

The Letcher County Central Cougars started their 2020 football campaign with a convincing 27-8 victory over Rockcastle County. The Cougars will look to build on the momentum of this victory when they host Pike County Central this Friday at 7:30 p.m. at Cougar Field. Pike Central lost its opening game to Perry Central by a score of 37 to 23.

In the win over Rockcastle County, junior quarterback Carson Adams led the LCC offense with three total touchdowns while an improved defense held the Rockets to 232 total yards.

Rockcastle County received the opening kickoff and quickly moved the ball to the LCC 11-yard line. The Cougar defense stiffened up and a fourth down quarterback keeper by Noah Parkey was sniffed out and a gang tackle forced a turnover on downs.

On the first play for the LCC offense, the ball carrier was tackled in the end zone for a safety, making the score 2-0 with 8:57 left in the first quarter.

Rockcastle County was driving on their next possession, but a forced fumble was recovered by senior Kaden Barnett to stop the scoring threat. 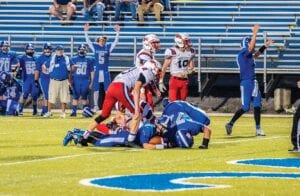 Above, Letcher Central’s Trevor Branham (holding ball) looked toward the referee for a touchdown signal after a run in last Friday’s win. Branham, assisted on the play by teammate DJ McCall, came up just short of the touchdown. At right, Alex Blair scores two points. (Photos by Chris Anderson)

After a three-and-out for his team’s offense, LCC defensive back Wyatt Ison had an impressive over the should interception for the second turnover forced by the Cougar defense. With the offense unable to get anything going following the interception, Jonah Little had a 39-yard punt that went out of bounds to flip field position.

On the very next play, senior linebacker Jepatha Griffith blitzed and tackled Rockcastle running back Matthew Chasteen for a two-yard loss. On third down, Cooper Bailey beat the lineman and his quarterback pressure forced an intentional grounding by Parkey.

Following another LCC punt, defensive lineman Jackson Meade swallowed up Parkey for a fiveyard loss. Then on fourth and inches a fullback dive went nowhere against the front four of the LCC defense forcing a turnover on downs near midfield.

Now back on offense, LCC’s Adams connected with receiver Trevor Branham for a 13-yard gain to give the Cougars a first down close to midfield. Two plays later an interception stymied that drive, but the LCC defense forced a punt that Sam Little returned to the Rockets 41-yard line. 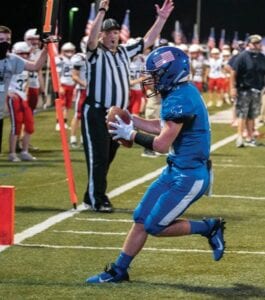 Carson Adams then threw a long pass that resulted in a 15-yard pass interference penalty against the Rockets. On the next play, Alex Blair took a hand-off for a 10-yard gain around the right side of the line. On third and three, Adams found Branham for a nine-yard gain just short of the goal line. Adams then scored on a one-yard quarterback sneak, after which he rolled right and threw a strike to Blair for the two-point conversion to give LCC an 8-2 lead.

After the Cougar defense got the ball back for the offense late in the first half, Adams hit Blair on a slant route for a 35-yard gain to set up a 24-yard field goal that was barely wide right to keep the score 8-2 at halftime.

Blair returned the second half kickoff to the LCC 40-yard line. On third down and six yards to go Adams completed a 29 yard pass to Sam Little on an out route. Three plays later, on fourth and two, Adams hooked up with receiver Reece Barnett for a 15-yard gain. On fourth and goal, Adams couldn’t get around the right side of the line and was tackled for a loss and a turnover on downs.

Following another defensive stand by LCC and a punt by Rockcastle County, Adams wasted little time connecting with Branham for a 33-yard touchdown pass. Jonah Little made the extra point to increase the Cougars’ lead to 15-2.

Rockcastle County answered that score after running back Matthew Chasteen took a hand-off and rambled 65-yards for a touchdown. The two-point conversion failed but the Rockets had cut the deficit to seven points.

LCC freshman Isaac Matthews returned the ensuing kickoff to midfield. After running back Hayden Brashear gained 14-yards up the middle the drive was capped off by a 24-yard rushing touchdown by Matthews. The conversion attempt failed, leaving the score at 21-8.

After consecutive punts by both teams, LCC defensive lineman Dakota Hall recovered a fumble that gave the Cougars excellent field position. Adams took advantage of the turnover and scored from six yards out on a quarterback keeper. The two-point conversion again failed making the final score 27-8 in favor of Letcher Central.

“It was a great atmosphere and great win for our program,” Coach Junior Matthews said. “I really enjoyed being back on the field and I know our kids did as well. We started slow but really got better on offense in the second half.”

Jonah Little gained 22 yards rushing on two carries and looked impressive on the one drive he played at quarterback late in the first half, completing three passes on four attempts for 23 yards.

Trevor Branham led LCC’s receiving corps with 51 yards on three catches and a score. Alex Blair had 39 yards on two receptions and Sam Little gained 31 yards on the catches.

The defense was anchored by Wyatt Ison who had 10 tackles and an interception. Sam Little had eight tackles. Jackson Meade had seven tackles including two tackles for loss.

Kaden and Koby Barnett also had seven tackles apiece. Cooper Bailey had the lone sack for an improved LCC defense that held Rockcastle County to 232 yards of total offense.