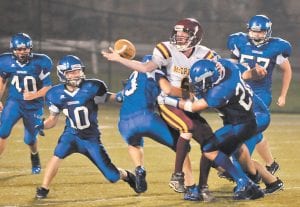 Letcher County Central High School’s junior defensive back Aaron Tackett forced McCreary County quarterback Jacob Gregory to fumble on a rushing attempt as fellow DB Quade Adams, a freshman, helped take Gregory down. The Cougars recovered the ball on their way to shutting out the Raiders, 56-0. Letcher Central, off to its best start in four years, travels to Hazard for its next game. (Photo by Chris Anderson)

The Letcher County Central Cougars hope to cut down on costly early-season penalties and turnovers as they seek their third straight win later this week against the always-tough Hazard Bulldogs.

The Cougars are coming off an impressive 56-0 victory over the visiting McCreary Central Raiders in the ARH Football Classic to improve their record to 2-0. The LCC defense still has not allowed a score this season and had 15 tackles for loss and forced five turnovers including two that they took in for touchdowns.

McCreary Central returned the opening kickoff to their 27- yard line. On first down, LCC junior Jordan Boggs tackled the ball carrier for a loss. A fumble on the next play was recovered by defensive lineman Billy Sturgill to give the Cougar offense great field position.

Coach Mike Holcomb decided to go for it on 4th and 4 from the Raiders’ 16-yard line, and his gutsy decision paid off. Jaylyn Williams took a handoff on a sweep play around the right side of the offensive line and scored a touchdown. Dustin Holbrook made the extra point to put the Cougars up 7-0 with 9:45 left in the first quarter.

Letcher Central teammates Aaron Thomas (center) and Devin Slone (left) fought for control of the Mc- Creary County fumble in Friday’s rout over McCreary, 56-0. The win takes the Cougars to 2-0 on the season, the first time the LCC won its first two games since 2009. (Photo by Chris Anderson)

McCreary Central started their next possession on the 22-yard line and a tackle for loss by Hunter Hall had the Raiders facing 3rd and 16. A pass interference penalty by the Cougars led to a first down. Three plays later, McCreary Central quarterback Jacob Gregory ran a sneak play on 4th and 1. LCC lineman Nick Mullins appeared to tackle Gregory in the backfield, but the Raiders got a favorable spot and the chains were brought out and they made the first down by inches. An option pitch to running back Rhett Kilgore netted another first down deep into Cougar territory. The first down shotgun snap sailed over Gregory’s head and was recovered by defensive end Dalton Gibson to halt the scoring threat.

On 2nd and 10, Williams, LCC’s sophomore running back, had the best 9-yard run you will ever see. Williams took the handoff heading left, and with three defenders about to converge on him in the backfield he changed directions and ran back all the way across the field. Quarterback Zane Blair even threw a block on the play and Williams got a positive gain on a play that should of lost yardage. On 3rd and 1, Hunter Hall broke two tackles as he ran for 30 yards to move the ball into the red zone. A costly holding call negated a 10- yard touchdown run by Williams and on the 2nd and long play the Cougars tried to throw a middle screen to the running back and the pass was intercepted by Raiders linebacker David Dunn.

On the first play of the second quarter, McCreary Central receiver Austin Wager made a miraculous catch between two LCC defenders for a 19-yard gain at midfield. Nick Mullins split two blockers on a pass rush and hit quarterback Jacob Gregory from behind causing a fumble that was recovered by Jordan Boggs. A bad snap by LCC on its first play turned the ball right back over to the Raiders.

McCreary Central tried an option play once again, but a bad pitch was scooped up by Jacob Kiser and returned 34 yards for a touchdown. The extra point made it 14-0 with 9:13 to go in the second quarter.

Letcher Central defender Houston Watts’s tackle for loss forced the Raiders three-and-out. After the punt, Cougar running back Hunter Hall had a 65-yard touchdown run nullified by a silly block in the back 10 yards behind the play as he was crossing the end zone. On the next play Zane Blair threw a perfect pass on a fade route to receiver Devin Wright for a 27-yard touchdown. Holbrook’s extra point split the uprights to increase the lead to 21-0 midway through the second quarter.

LCC defender Aaron Tackett had a tackle for loss to force another McCreary Central punt. The punt was partially blocked and barely crossed the line or scrimmage in the air. The Cougars committed another mental error, this time a defender tried to catch the blocked punt instead of just letting it go and McCreary Central recovered the fumble.

A Dalton Gibson tackle for loss created a 4th and long situation that the Raiders decided to go for. Running back Rhett Kilgore took the handoff and right before he was going to get tackled in the backfield decided to throw the ball. The pass was intercepted by Nick Mullins and returned 25 yards for the second defensive touchdown of the first half. With 1:41 left in the first half LCC led 28-0.

McCreary Central went for it again on fourth down and Mullins tackled the ball carrier just short of the line. The Letcher Central offense took over possession at the Raiders’ 43-yard line. With 31 seconds remaining, Zane Blair completed a 15-yard pass to Hunter Hall. With 4.4 seconds left, Blair couldn’t find any receiver open deep, so he threw a check down pass to Hunter Hall who juked a defender and took it to the house for a score as time was expiring. Holbrook remained perfect on extra points and Letcher Central took a 35-0 lead into halftime.

Jaylyn Williams returned the second half kickoff to the 44-yard line. On first down, receiver Josh Boggs came in motion to take a handoff from Blair around the left side. Boggs outran the entire defense and went the distance for a 56-yard touchdown. The extra point made it 42-0 just 17 seconds into the third quarter. The officials, following Kentucky High School Athletic Association (KHSAA) rules, instituted a running clock that cut down on the number of plays in the second half and kept the score reasonable.

The LCC defense stood strong again and forced a punt that Hunter Hall returned 74-yards for a touchdown. The point after was good to make the score 49-0.

McCreary Central moved the ball all the way to the LCC 35 yard line. On 1st down, Jacob Gregory ran the ball up the middle and was trying to pick up extra yardage when he was stripped of the ball. Freshman Kyler Sturgill recovered the fumble to keep the shutout going.

Senior Houston Watts was inserted at quarterback and wasted no time showing his playmaking ability. On the third play Watts ran a quarterback keeper and scored from 54 yards out. A hustling Aaron Thomas threw a nice block on the 10 yard-line that paved the way for the score. Holbrook made his eighth straight extra point to make the final score 56-0 in favor of the Cougars.

McCreary Central did a great job keeping the ball away from the LCC offense and ran 58 offensive plays. Letcher Central ran just 18 plays as a result of special teams and defensive scores. Zane Blair threw the ball only eight times, completing three passes with two of them going for touchdowns. Jaylyn Williams had two rushing attempts for 25 yards and a score.

Hunter Hall was the offensive star and gained over 73 yards on the ground and had a 28-yard touchdown reception. Hall also had a nifty punt return for a touchdown. Josh Boggs and Houston Watts each scored on 54-yard touchdown runs.

Kickoff for Friday night’s game in Hazard is 7:30.