Young Lady Cougars lose at home and on the road

The Letcher Central Cougar boys’ basketball team played twice this past week. The Cougars have really come together the last few games and they had put together a string of four wins in a row. With a record of 14-9, the Cougars traveled to Hazard to take on the 14th Region’s number one team.

The Bulldogs were 21-4 entering the contest and were fresh off winning the 14th Region All A Classic and traveling on to Richmond to play in the All A State Tournament. They represented the 14th Region well as they made it to the finals before losing to University Heights in the championship game.

The Bulldogs have taken over as the team to beat in the region, while defending 14th Region champ June Buchanan has slipped a bit lately. The Cougars are playing their best ball of the season and they would have to against the Bulldogs.

The Bulldogs are led by former Perry Central coach Al Holland. His assistant is former Bell County and Whitesburg coach Eddie Whitaker. Hazard is led on the floor by Whitaker’s son, Josh, who is only a sophomore but plays much older. Michael Campbell is the man in the middle for the Bulldogs. 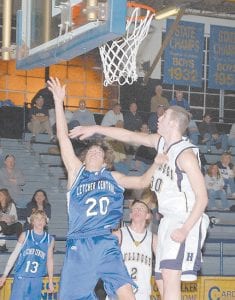 Letcher County Central’s Jordon Reynolds put up a shot over a Hazard defender during the Cougars’ game against the Bulldogs last week. No. 13 for Letcher Central is Josh Proffitt. (Photo by Chris Anderson)

The Cougars kept the game close as they led 15-13 after one but fell behind 24-20 at the break. The Cougars had to settle for outside shots as the Bulldogs were too strong inside. But the Cougars have the long-range shooters to do the job and they did just that as they connected on 9-16 from behind the arc to keep it close and give themselves a shot at the end. The two teams battled and the Cougars came from behind to tie the score at the end of regulation at 46-46.

This was a very close game and the Cougars showed they can play with anyone in the region. The difference in the ball game was on the foul line as Hazard shot 28 free throws and made 22 while the Cougars only shot 8 and made 5. 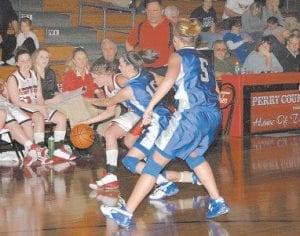 The Cougars were led in scoring by Charlie Banks with 18 points and 7 rebounds. He hit two treys and had two steals. The Cougars got big games from Josh Proffitt and Devon Blair. Profitt hit 3 treys and finished with 12 points and 6 rebounds while Blair hit 4 treys and finished with 4 assists. The Cougars also got 4 points from Jordon Reynolds and 6 rebounds inside. The only other Cougar to score was Eric Ison as he came off the bench to score two points and he also had 4 rebounds. Malachi Longworth was held scoreless but he pulled down 4 rebounds also.

The Cougars shot 33 percent for the game on 17-51 shooting while Hazard wasn’t much better as it shot 34 percent and hit 14-41. The Cougars fell to 14-10 while the Bulldogs improved to 22-4 and knew they had escaped by the skin of their teeth.

The Cougars were looking to get some revenge later in the week against a young Wolfe County team. Wolfe traveled to Ermine losing six of their last seven games and having a record of 10-11. 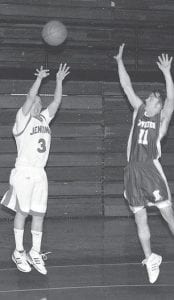 JENKINS WINS – Eric Grimm goes up for two of his six points during the Cavaliers’ 71-39 win over Ervinton, Va., last week. (Photo by Chris Anderson)

A sluggish start by the Cougars in the first quarter let Wolfe County hang around as it trailed 13-12 after one, but it was lights out after that. The Cougars’ defense was relentless and it was steal after steal as the Cougars roared out to a 37-18 lead with a big 24-point second quarter.

The Wolves only got deeper in trouble as the Cougars outscored them 40-20 in the second half and went on to roll 77- 38.

The Cougars had 16 steals and shot 52 percent for the game as they hit 31-60. They improved to 15-10 and were led in scoring by Charlie Banks with 14 and Josh Proffitt and Devon Blair with 11 each. Ryan Brock and Malachi Smith each had 8 off the bench. Smith connected on 2 long treys to excite the fans. Malachi Longworth, James Gose and Eric Ison each had 6. Jordon Reynolds had 4 points, Elmer Hammonds had 2 and Chase Adams had 1 to round out the scoring for the Cougars. The Cougars got 31 points from their bench and Wolfe had only 8.

Winners of five of their last six, the Cougars have one more home game coming up this week against Powell County before the district tournament starts and the fun begins.

The Lady Cougars saw their record slip to 8-16 as they fell twice last week. They lost to Perry Central on the road and Estill County at home.

The Lady Cougars played solid and were led by Brittany Sexton with 25 and Sharaye Kincer with 16. Shannon Bays had 8, Morika Begley 5, Wynn had 5 and Thomas had 3. Sturdivant led everyone with 25 for Perry Central.

The Lady Cougars were led in scoring by Sharaye Kincer with 22 points followed by Bays and Begley with 6 each. Sexton was held to 5 points and Wynn tossed in 4.

The Lady Cougars will be on the road for their final two games of the regular season against Wolfe County and Leslie County and hope to make some noise.