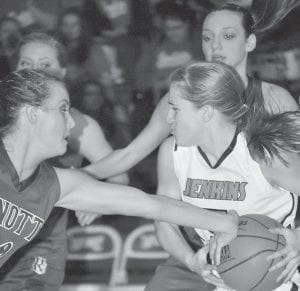 STAR OF THE GAME(S) — Knott County Central players surrounded Lady Cavalier Whitney Creech on January 15 during the Lady Patriots’ 65-50 win over Jenkins in the All ‘A’ Classic Tournament district play. Creech led her team with 19 points, then came back six days later to score 34 points in another Jenkins loss to Knott Central, the latter one by a score of 62-50. (Photo by Brandon Meyer/B. Meyer Images)

With victories last week over Breathitt County and Louisville Moore, the 15-5 Cougars will be at home for the next week. LCC hosts 11-3 Knott County Central Friday night with the top spot in the 53rd District standings on the line. The Lady Cougars lost 50-46 at Knott County earlier this month, and need a victory of five or more points to claim the top spot in the district standings.

LCCHS will host Pikeville January 28, and Cordia on February 1.

Sophomore forward Kristina Bentley came off of the bench midway of the third quarter to replace senior Julie Cornett after she picked up her fourth foul, and keyed the Lady Cougars’ victory over Louisville Moore in the Coaches vs. Cancer Classic last Saturday afternoon at East Jessamine High School.

“Kristina came in and picked us up with her play on both ends of the court,” said coach Dickie Adams. “Julie had just picked up her fourth foul and we only had a three-point lead with more than a quarter and a half left.”

With senior Kelah Eldridge nailing three treys and sophomore guard Cheyanne Stidham knocking down a pair, LCCHS raced out to a 12-2 early advantage that grew to 22-10 by the end of the first quarter. The Lady Cougars were cruising along with a comfortable 28-12 lead midway of the second quarter, but Moore got hot, said coach Adams. “They couldn’t miss and we couldn’t stop them, and they ran off 16 unanswered points and we tied at 30-30 at the half.”

With Julie Cornett on the bench with four fouls, Kristina Bentley stepped up big time and LCCHS was able to push out to a 52-46 lead by the end of three quarters.

Bentley finished with 14 points and nine rebounds, and Cornett wound up with 13 points and five rebounds.

“That one forward position, shared by Julie and Kristina, produced a total of 27 points and 14 rebounds,” said Coach Adams. “And when you add in Keisha’s (Collins) production (another double/double of 11 points and 15 rebounds), we played very well inside. However, I think our conditioning at the end was a big factor. They (Moore) just seemed to run out of gas in the last quarter.”

Seniors Vannah Breeding and Kelah Eldridge took advantage of their teammates’ strong play inside with some deadly perimeter shooting down the stretch as the Lady Cougars out-scored the Lady Mustangs 32-15 to win going away.

Eldridge finished with a gamehigh 23 points on 9/16 shooting, six rebounds and six assists. Breeding would up with nine points. Both players had three treys. Cheyanne Stidham chipped in with nine points, all coming on treys as the Lady Cougars were 9/25 from behind the arc and 28/60 field goal shooting for 47 percent.

To say the Lady ‘Cats, now 8-5 and ranked a very respectable fifth in the 14th Region standings, ran into an offensive buzz saw may be an understatement. For the game, LCCHS made 31-68 field goal attempts for 46 percent after cooling off from 58 percent in the first half (18/31).

Senior Julie Cornett’s 12 points in the first quarter, nearly all on assists from Kelah Eldridge, keyed the Lady Cougars’ early run that led to a commanding 23-12 lead at the end of the opening quarter. LCCHS pushed its lead to 41-25 by the half and never allowed BCHS to get any closer than 17 after that.

Sophomore Courtney Brock came off the bench to nail backto back treys to push LCC’s margin to 47/26 with 6:15 left in the third quarter. Brock finished with nine points. Senior Keisha Collins’s only basket of the game extended LCCHS’s lead to 55-34 heading into the final quarter. Collins pulled down a team-high eight rebounds and blocked two shots.

Julie Cornett’s last basket, fittingly on an assist from Eldridge, was her 1,000th point and gave LCCHS a 68-40 lead with 3:25 left to play. Cornett finished with 16 points, seven rebounds, three assists and two steals.

Eldridge, already a 1,000-point scorer, finished with a double/ double of 11 points and 11 assists. She also had three rebounds and three steals.

After a slow first half shooting the basketball, sophomore Cheyanne Stidham made 4/7 field goal attempts and finished with 10 points. Kristina Bentley and Kelli Quillen wound up with two points each.