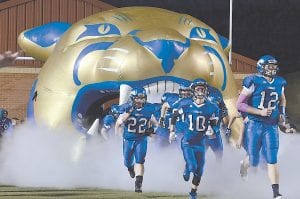 Seniors Eric Brown (10) and Zane Blair (12) led the Letcher County Central High School Cougars onto the gridiron Friday for what would be the seniors’ final regular season game played at home. Letcher Central went on to defeat Whitley County, 42-28, to capture the District 8 championship in the Kentucky High School Athletics Association’s 5A classification. The Cougars’ 7-2 won-loss record is seventh best among the 39 Class 5A teams. LCC ends its regular season this Friday at Class 3A Breathitt County. (Photo by Brandon Meyer/B Meyer Images)

Letcher County Central wrapped up the district title by defeating Whitley County by a score of 42- 28 on senior day. Jaylyn Williams and Hunter Hall combined for five rushing touchdowns to keep LCC undefeated in 5A District 8 play and led the Cougars as they earned a No. 1 seed in the playoffs.

The Cougars will host Madison Southern in two weeks in the first round of the playoffs. One of the top running back prospects in the country, Damien Harris, plays for the Eagles, but he is currently injured and it is unknown yet whether he will be healthy enough to play in the game.

Letcher Central started the opening possession at its own 35- yard line after the opening kickoff sailed out of bounds. Facing third and three, LCC senior quarterback Zane Blair connected with Josh Lee on a seam route for a 22-yard pickup and a first down. On the next series the Cougar went for it on fourth and 10. Blair completed a 24-yard pass to Williams to get the ball into the red zone. Then Blair threw a wide receiver screen to Tanner Lucas for a nine-yard touchdown. Blair made the extra point to give LCC a 7-0 lead with 10:16 to play in the first quarter. 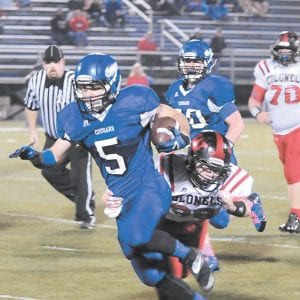 On the second play of the opening possession for Whitley County, linebacker Zane Blair made a leaping interception of a Luke Woods pass and returned the ball to the Colonel 40-yard line.

Blair completed passes of 15 yards to Lucas and 14 yards to Hall to set up a Williams threeyard touchdown run right up the middle. The extra point was no good, but Whitley County quickly found itself with a 13-0 deficit.

Colonel running back Austin Ysidro had consecutive runs of 11 and 10 yards to get the ball into LCC territory. Blair had a tackle for loss to force a fourth and seven. Whitley County ran a wide receiver screen on fourth down that Cougar linebacker Kyler Sturgill sniffed out to make the tackle and a turnover on downs.

Williams caught a swing pass from Blair for 19 yards on first down, but the LCC offense bogged down near midfield and was forced to punt.

A holding penalty by a Colonel offensive lineman nullified a 60-yard touchdown run by Sean Hickey. On the next play Woods kept the ball on a quarterback keeper for a 16-yard gain on the last play of the first quarter. Then Tanner Lucas intercepted an overthrown pass and returned it 33 yards to the Whitley County 37-yard line.

On first down linebacker Hunter Asher sacked Blair. Williams took the second and long carry up the middle and broke two tackles on his way to a 23-yard gain. On the next play Williams got the handoff and cut back to go into the end zone untouched from 12 yards out. Hunter Hall ran over a defender and dove into the end zone for a two-point conversion to increase LCC’s lead to 21-0.

Whitley County answered with a seven-play, 83-yard drive capped off by a Woods 11-yard touchdown where he kept ball on an option play. The extra point was wide right to make score 21-6 in favor of LCC.

Blair found Lucas on a streak route and after Tanner caught the pass he sliced through two defenders for a 73-yard gain to the Colonel one-yard line. The next play Hunter Hall scored on a run up the middle and after the extra point was no good, Letcher Central led 27-6.

Woods scrambled for a 38-yard gain on the next Whitley County possession and Hickey scored a touchdown with 25.3 second left in the first half. The two-point conversion was no good to make the halftime score 27-12.

Zane Blair completed nine passes on 16 attempts for 223 yards and a touchdown and Jaylyn Williams had two rushing touchdowns to pace the LCC offense in the first half.

Whitley County received the second half kickoff and marched the ball into the red zone. The Cougar defense stiffened and on fourth and six LCC linebacker Avery Stamper stopped Hickey a yard short of the line to force a turnover on downs. The Colonels’ 14-play, 77-yard, six-minute drive resulted in zero points and was a momentum changer in the contest.

Williams had a 43-yard run on the first play of the second half for the LCC offense and then Hall took a handoff up the middle for a 52- yard touchdown. Hall also scored on the two-point conversion attempt to give LCC a 35-12 lead.

Whitley County unsuccessfully attempted a fake punt on fourth down on its next possession to give the LCC offense back the ball near midfield.

Williams gained 14 yards on a sweep around the right side. Then on third down Williams went 13 yards right up the middle of the Whitley County defense. Two plays later Williams ran it in for a touchdown from two yards out. Blair made the extra point to increase the Cougar lead to 42-12 with 50.2 seconds left in the third quarter.

Cougar defenders Preston Maggard and Jordan Boggs combined to sack Woods on a third down play to force another Whitley County punt.

The LCC offense went three and out for the first time in the game and Whitley County capitalized and quickly moved the ball into the LCC red zone, scoring on a Ysidro run from one yard out. The two-point conversion was good to cut the lead to 42-20 with 7:19 left in the contest.

Isaiah Tyree recovered the onside kick attempt for LCC near midfield. On second and 13 Tanner Lucas caught a slant route from Blair for a 16-yard gain and first down. The drive stalled and Letcher Central punted with 5:22 to go in the fourth quarter.

Whitley County had a six-play, 80-yard drive that culminated by Ysidro having a three-yard touchdown run. The two-point conversion made the score 42-28 with just over two minutes in the game.

Tyree recovered the onside kick again to secure the district championship for the Cougars. Coach Holcomb has turned around the Letcher Central program in just his second year at the helm. LCC improved its record to 7-2 on the season but, more importantly, finished undefeated in district play. The Cougars eclipsed almost 500 yards of total offense and had 239 yards through the air and 244 yards on the ground for almost a perfect 50/50 split between run and pass. Zane Blair finished the game completing 10 of 19 passes for 239 yards and a touchdown. Jaylyn Williams had 136 yards rushing on 13 carries and three touchdowns. Hunter Hall carried the ball 11 times for 78 yards and two touchdowns. Tanner Lucas had four receptions for 113 yards and a touchdown.

Sophomore Ave r y Stamper, who had 13 tackles, led the defense. Isaiah Tyree accounted for 11 tackles and Jacob Kiser had nine tackles for the Cougars. Jordan Boggs had two sacks and was a disruptive force all night long for LCC.