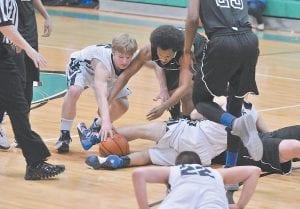 Letcher Central High School’s Austin Caudill fought for a loose ball during last week’s 53rd District Tournament championship game against June Buchanan. No. 22 for Letcher Central is Elijah Raglin. The Cougars will travel to Knott County Central in Hindman Thursday to play Buckhorn in the opening round of the 14th Regional Tournament. Tipoff is set for 8 p.m. (Photo by Chris Anderson)

The Letcher County Central Cougars this week will make their fourth 14th Regional Tournament appearance during Coach Robert Hammonds’ seven years as head coach, but this is the first time during Hammonds’ reign the Cougars are going as champions of the 53rd District.

The Cougars’ last district championships came in 2008 and 2009 under coach Raymond Justice, who was then fired and left to coach East Ridge High in Pike County in 2010 where his theneighth grade son, Cameron Justice, was just emerging as an NCAA Division I talent. The younger Justice went on to become a three-time All-State player at Knott Central and is a freshman at Vanderbilt University this season.

The semi-finals are Monday evening, March 7, with the championship game scheduled for 7 p.m. on March 8.

LCC and Buckhorn split a pair of games during the regular season. LCC shot 54 percent in beating the Wildcats 61-51 on January 7 for fifth place in the WYMT Classic at Knott Central. On January 19, the Wildcats defeated LCC in Ermine after the Cougars shot just 35 percent for the game.

In the final regional rankings released before the start of the district tournaments, Perry Central, Letcher Central and Buckhorn were the top three teams. The 16- 15 Wildcats have three outstanding players in Josh Crank, Connor Hoskins and Ryan Boggs, who can generate a lot of offense from behind the arc.

The Letcher Central Cougars, behind a timely steal and layup by junior All-State Torell Carter in the final seconds, outlasted June Buchanan 55-52 in the district tourney championship at Jenkins to earn their first district title since 2009.

The Cougars struggled early to make shots. Torell Carter’s short jumper gave LCC a 6-5 lead with 2:58 left in the first quarter. JBS then scored the next 11 straight points to take a 16-6 lead heading into the second quarter. Senior guard Jordan Gregory hit a short jumper in the first possession of the second quarter and, after Daniel Snow scored for JBS, the Cougars went on a 10-2 run to close to within 20-18 on Gregory’s jumper with 4:28 left in the first half. JBS ended the first half clinging to a 29-28 lead, but the Crusaders were in some foul trouble with their twin towers of Idris Akinyemi and Prince Anoskie saddled with two and three fouls, respectively.

JBS shot the basketball very well in the first half, making 11/24 field goal attempts, but struggled in the critical second half against a very tenacious Cougar defensive pressure that may have forced just six turnovers but, more importantly, contested every shot which resulted in the Crusaders making just 6/26 field goal attempts — including two missed treys by guard Steven Silvers in the final 16 seconds.

For the game, JBS made 17/50 field goal attempts — including 5/20 from behind the arc — for 34 percent. After the first quarter, LCC started making shots and finished with 21/51 for a very respectable 41 percent.

After matching the Crusaders in the rebounding battle in the first half, LCC was outrebounded 23/12 in the second half, but won by making more shots — 9/19 from field goal range — while JBS made just 6/26.

In the third quarter, LCC took its second lead of the game at 32- 31 on Torell Carter’s lay-up with 5:49 left. JBS reclaimed the lead, but LCC went back on top 39-38 on freshman Gregory Kincer’s lay-up with 45 seconds left in the third. Junior guard Austin Banks’s trey gave the Cougars a 42-38 lead heading into the final quarter.

JBS reclaimed the lead at 45- 44 on Steven Silvers’s pair of free throws with 5:10 left to play. There were two more lead changes before Carter’s three-point play pushed the Cougars on top 49-47 with 1:49 left to play.

JBS tied the score at 52-52 on Elijah Branham’s pair of free throws with 57 seconds remaining. After a Cougar turnover, JBS elected to milk the clock but Carter stole a sloppy pass and scored on a run out to give the Cougars a 54- 52 lead with 16 seconds left. JBS’ Silvers missed two shots behind the arc before the Cougars could claim the rebound. Junior Austin Caudill made the second of two free throws with one second left and the Cougars were district champs.

Torell Carter led the 21-9 Cougars with a game-high 19 points. Carter, who played all 32 minutes, claimed six rebounds, dished off six assists and came up with two steals and blocked one shot — all while making just two turnovers.

Based on their regular season play, Austin Banks, Austin Caudill, Tyler Collins and Jordan Gregory were named to the 10-player All 53rd District Team. Torell Carter was named the MVP.

Steven Silvers, Idris Akinyemi and Prince Anoskie were named to the All District Team from June Buchanan.