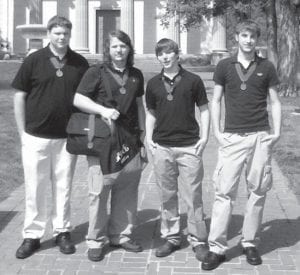 Addison Whitaker, Matt Hopkins, Daniel Patterson and Dylan Maxie won second place at Kentucky’s National History Day Competition in the historical documentary competition on April 30 in Frankfort. The students will compete in the national competition at the University of Maryland on June 13.

Matt Hopkins, Addison Whitaker, Dylan Maxie and Daniel Patterson won second place at state competition in the historical documentary competition on April 30 in Frankfort at the Thomas Clark History Center. Their documentary is titled “Mountaintop Removal Mining: Impact vs. Prosperity” and focuses on both sides of the debate on mountaintop removal mining. The documentary maintains an objective analysis illustrating support for this mining process and the arguments opposing the mountaintop removal method. The goal of their project is to inform viewers of the debate with enough information so that each person may come away with a more informed opinion on the topic.

This is the sixth year in a row LCCHS students have advanced to national competition.

The students are all seniors at LCCHS and completed the project in Charles Hall’s Appalachian Studies class. These students will tour Washington, D.C. and will be honored at a reception held in the Smithsonian Institute’s American History Museum.

Because of the cost of traveling to the University of Maryland and Washington, D.C. for national competition, the LCCHS Social Studies Department is accepting donations from businesses, civic organizations and private citizens who are interested in supporting these students. Donations may be either dropped off or mailed to Charles Hall, LCCHS Social Studies Department Head, at 435 Cougar Drive, Whitesburg, Ky., 41858.