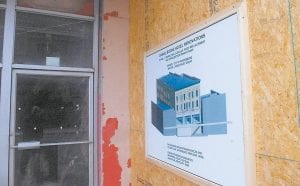 THE ONCE AND FUTURE HOTEL — A shiny architect’s rendering of how the Daniel Boone Hotel building in Whitesburg should look after the first phase of renovations hangs on a wooden gallery protecting passersby. Bids on the stabilization project have been delayed while the building is tested for lead paint. (Photos by Sam Adams)

Bidding for the first phase of reconstruction on the Daniel Boone Hotel has been delayed again after questions arose about lead paint.

Architect Bill Richardson said most of the asbestos was removed from the hotel when it was used as a temporary courthouse in the late 1990s, but he could find no information about testing for lead paint. It was almost certainly used at some point during the century-old building’s history, Richardson said.

The city already had unused grant money to test for the materials, and testing will begin next Wednesday. Richardson said a testing company from Louisville will bring in a 60-foot lift and samples will be taken from the remaining part of the roof, which was partly collapsed, and from each of the four levels of the building.

If lead paint is found, that will mean that workers will have to wear respirators and protective clothing, and take precautions to prevent airborne lead dust when the damaged materials are removed. 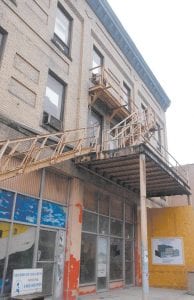 Richardson said he had been a little concerned that there would not be many companies to bid because the project is big and very specialized.

“It’ll take someone who’s hungry and really knows how to do it,” he said.

Working in the city’s favor is the small number of projects available to bid in this area. Eight general contractors showed up at the pre-bid conference two weeks ago to determine whether they want to bid. It was at that meeting that questions were raised about lead.

The lead study could push bid awards back to late February or into March, but Richardson said that won’t impact the schedule much because of the potential for bad weather days earlier in the year that could have slowed down progress.

The first phase of the project will include removing all the debris from the collapsed interior, shoring up the remaining floors and exterior walls, building a steel frame for the new construction, roofing the building, demolishing the old elevator shaft and building a new one, and closing it up to the weather so dryers can be put in to remove moisture from the brick.

Richardson said the roofing work to be in the initial project will include removing the original terracotta tile over the roof edges, installing new joists and sheathing, covering the roof with rubber, and replacing the tile around the edges. He said the city doesn’t have enough money to complete the project, but is advertising for bid alternates so if additional grants are awarded, work can continue without rebidding. The alternates will include:

• Provide tuck pointing of the brick.

Plans for the complete renovation call for a rooftop patio and a penthouse. The main floor will have a business center with meeting rooms, a fitness center, and possibly retail and entertainment space. Plans also call for the fire escape to be removed from the front of the building because changes in the building codes no longer require it. The steel canopy to which the escape is attached is an original part of the building, and will remain.

The building is the largest in downtown Whitesburg at about 60 by 160 feet with four floors, including the full basement. When it was opened the weekend of July 4, 1920, the Daniel Boone Hotel had cost about $100,000 to build and furnish — about $1.2 million in today’s dollars. Stabilization of the building alone will cost more than $1 million.

At the time the Daniel Boone was built, it was a first-class hotel in a town that still had dirt streets and farm animals in downtown. In addition to a hotel, it featured a banquet room where many weddings and meetings were held, a café, a barbershop and several offices. An open atrium allowed sunlight from a skylight to reach to the bottom floor.That skylight was part of the cause of the collapse of the roof and floors in the front half of the hotel. Richardson said part of the glass in the skylight was broken and allowed water into the building, damaging three wooden floors below it. When the roof collapsed, it took all three floors with it.

Richardson said the collapse didn’t damage the outside walls and the foundation of the building is still sound. He said a local builder told him his grandfather watched the first round of cut stone foundation being laid for the building. He said stone masons dug all the way down to bedrock, and then grouted the first round of stone to it. Drilling around the base late last year as part of the preparations for construction confirmed that the building sits on sandstone.