Leader of The Ataris here Friday 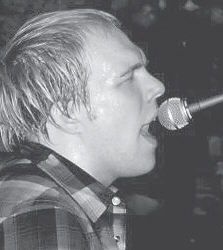 KRIS ROE of The Ataris.

The singer, songwriter and guitarist responsible for developing The Ataris into an alternative rock band with a worldwide following will perform an acoustic concert in Whitesburg this week.

Kris Roe, who formed The Ataris in his hometown of Anderson, Indiana in 1994, will perform every song from the band’s 1999 breakthrough album “Blue Skies, Broken Hearts… Next 12 Exits” when he takes the stage at Summit City on Main Street on Friday night (January 25). Admission is $10.

The album, which took its name from a mobile home park along Highway 101 in Santa Barbara, California, is considered the band’s finest work by many. However, it wasn’t until after the release of the 2003 album “So Long, Astoria” that The Ataris found a worldwide audience. The album, released by Columbia Records, sold more than 500,000 copies – fueled largely by a cover of Don Henley’s “The Boys of Summer,” which reached No. 20 on the Billboard Hot 100.

The Ataris found more success in 2004, when their song “The Night That the Lights Went Out in NYC” appeared on the soundtrack of the hit movie “Spider Man 2,” which reached No. 7 on Billboard’s Top 200 albums chart. A well-received live album, “The Ataris: Live at the Metro” – which borrowed its artwork from The Who’s early ’70s classic “Live at Leeds” – was also released in 2004.

In February 2007, The Ataris released their most critically-acclaimed album, “Welcome the Night,” on Isola/Sanctuary. While the album featured a much more mature and mournful sound, it was met for the most part with indifference by fans of “So Long, Astoria.”

Persons wishing more information about the concert may call Summit City at 633-2715.