Leadership not just word for this superintendent 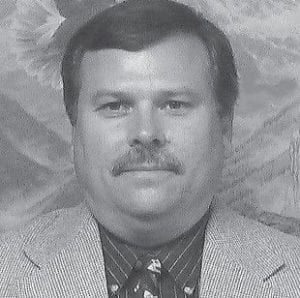 You know, it’s a pretty vague term — “leadership” — and when it’s thrown around so often, you wonder if maybe it’s just a buzzword used by public officials who lack more concrete solutions.

But when Johnson County School Superintendent Steve Trimble says it, his folksy sincerity, clarity of purpose and self-evident dedication to the people he leads makes it work — every time.

In fact, the first thing you notice when you walk into Trimble’s office is the sign on the front of his desk — well, no, that’s not quite the first thing.

The first thing you notice is that the office was decorated by some sort of medieval falconry enthusiast — or, as it turns out, someone who cares about his school far more than any known principles of interior design. The eagle is the high school’s mascot, and birdsof prey are knit, forged, nailed, carved and soldered onto every readily-attachable surface.

But after the eagles, it really is the sign that grabs you. “Is this decision best for the children of Johnson County?” it asks, and Trimble points to it over and over again during our conversation. If “leadership” is his battle cry, the sign is the standard he bears.

Having one copy of John Maxwell’s 21 Irrefutable Laws of Leadership sitting around might just mean the owner wants people to know he reads more than Harry Potter. But having three copies of that book, all sitting next to each other on the shelf says something different about Trimble: I really believe in this stuff — and I like to share.

But it doesn’t end there: Jim Collins’s Good to Great, other, less well-known management titles, even the Maxwell Leadership Bible. And lest you think that Dr. Maxwell is being figurative, think again. The subtitle is “Developing leaders from the word of God.” In fact, o n three different plaques in the office, there is a verse from Isaiah, the 40th chapter: “They shall soar on wings of eagles.”

While Johnson County is not quite as poor as some of its neighbors that lie deeper in Appalachia and farther away from U.S. Route 23, if you were to ask someone to guess which district the state considers its finest, I imagine that the greater Paintsville metropolitan area would not be on the short list — and yet both the county and city districts have excellent schools, based on test scores.

In fact, when I interviewed Gov. Steve Beshear for a story on education in eastern Kentucky, Johnson County was the only district he mentioned.

When I tell Trimble about this conversation, he swells with evident pride and beams, ear-to-ear. “We don’t take excuses,” he says. “Whether you get a 36 on your ACT or have special needs, we believe everyone can learn and can be a successful person.”

He’s channeling the “soft bigotry of low expectations” idea popularized by President George W. Bush — although he never mentions the phrase or the politician by name — but all this talk brought to mind a different public figure: Diane Sawyer.

All across the eastern Kentucky coalfield I’ve asked people about ABC Television’s February special “A Forgotten America: Children of the Mountains” and the painful stereotypes of ignorance and poverty it reconjured. Trimble’s native county was featured far too prominently for his liking, as a site of alleged incest among relatives of a football player struggling to overcome a dysfunctional family. “They didn’t mention the seven state championships we’ve won in academics,” he laments to me, looking genuinely confused, “I know we’ve got some problems, too, but why don’t they ever do anything on the good stuff?”

When I asked why he thought there was so much focus on the negative, I fully expected a speech against poverty-mongering New Yorkers and maybe even against outsiders in general — but it never came. Trimble rose above that kind of provincial pettiness and instead of lashing out, his answer looked within — and forward.

“People want to hear about poor old eastern Kentucky and the hillbillies and all that—but we didn’t let it get us down. We went ahead and won the state Governor’s Cup again anyway.”

Yes they did. Two months later.

As I left the school-board office, I thought about one of the ongoing conversations I have with a friend from school: Does progress come from the once-in-a-generation wunderkind (JFK) or from the hard-working insider whose perseverance eventually triumphs (Gen. George Marshall)?

Of course, history is complex, and the pendulum swings both ways, but when I asked Trimble how long he had been in the school system, his answer caught me off guard: “Since I was five years old. For me, it’s more than a job; it’s a way of life.”

As for progress and who makes it? Well, here’s this rural educator — a true local boy — who is doing things with these kids that many education experts call simply … impossible.

And when you think about it, it really is. If you achieved these results — stellar test scores, state

News and World Report — with wealthy students in a magnet school in Lexington, well, maybe.

But in Appalachia? In a school district where two thirds qualify for government-subsidized lunch? Impossible.

And yet — against the odds — they’ve gone ahead and done it anyway: A small group of thoughtful, committed citizens was able to change the world—or at least their small part of it.

But, after all, as the sociologist Margaret Mead reminds us … That’s the only thing that ever has.