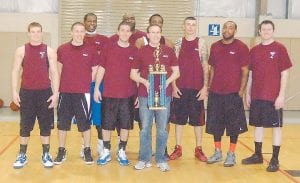 — A team sponsored by BB&T bank won the championship of a 10- team adult men’s league at the Knott County Sportsplex. The teams were made up of players from Letcher, Knott, Perry, Floyd, and Johnson counties. Members of the BB&T team included some players from Letcher County. Pictured above are (front row) Devin Burchett, Brandon Miller, Daniel Combs, Jack Burchett, George Campbell, Corey Hairston, Matt Day, (back row) Will Ison, Sandrell Spann, and Micah Oden.