Leaves of three, let it be

Exposure to poison ivy leads to doctor visits for many here 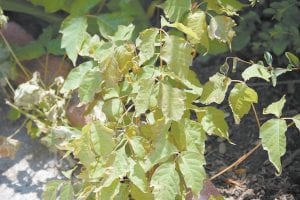 A stand of poison ivy in a flower garden in Whitesburg began to wilt earlier this week after being treated with an herbicide. Learning to identify the three-leaf poison ivy plant and staying away from it is the best method for not contracting the itchy rash its oils cause, says Dr. Ricky Collins, emergency room doctor at the Whitesburg hospital. (Photo by Sally Barto)

“Leaves of three, let it be,” were the words of wisdom my 15-year-old cousin Meg said to me upon learning I had suffered a bad allergic reaction to poison ivy.

I contracted the rash after returning from a week’s vacation recently to find that weeds had overtaken the flowerbeds outside my house. After pulling weeds for a couple of hours, I scooped them up in piles with my forearms and disposed of them. Little did I know that some of them were poison ivy.

Surprisingly to me, the huge rash I ended up with didn’t appear right away. It took at least a day for the urushiol — the clear oily resin secreted by poisonous plants — to affect me. By the next day, however, red splotches began appearing on the backsides of my arms between my wrists and elbows. The more I itched, the more I scratched and the worse it got.

A Benadryl spray temporarily masked the itching and I thought the red spots would heal and go away on their own. It only got worse. I then forked over $37 for a tube of Zanfel, which claims to be the only overthe counter product known to remove urushiol, but I had waited too long for the product to be of any help.

After using the entire tube, I knew it was time to visit the doctor’s office, where I got a shot of cortisone to fight the itching, a prescription for the steroid prednisone, and the recommendation to apply Calamine lotion to the rash. It took a day or so for the itching to go away and about a week for my arms to heal.

Unfortunately for others, I am not the only one in Letcher County who hasn’t let poison ivy “be” this spring and summer. Dr. Ricky Collins, medical director of the emergency room at Whitesburg Appalachian Regional Hospital, said at least one person a week is treated at the hospital for allergic reactions to the three-leaf nuisance. In fact, while I was interviewing Dr. Collins about the prevalence of poison ivy last Thursday a patient was waiting to be treated for a reaction to the poisonous oils.

Among the larger than usual number of people who have had to seek medical treatment for reactions to poison ivy this year is Letcher County Attorney Jamie Hatton. Hatton, who had never developed a reaction to the plant before, also came in contact with it while pulling weeds. He said the itch from the rash he developed left him feeling miserable until after he was prescribed steroid pills and the anti-itching cream Desoximetasone.

“I thought I wasn’t allergic, but turns out you can become allergic at any time in your life,” said Hatton.

According to Dr. Collins, the only sure way to prevent developing an allergic reaction to poison ivy is to learn what the plant looks like and stay away from it. Poison ivy is found most commonly here as a plant, but can also form a stand-alone bush or a vine that can attach itself to about any structure

“People pull the stuff up and don’t know what it is,” said Collins. “If you have an allergy to that oil, it will break you out. Some people it doesn’t bother. Let someone who is not allergic to it, deal with it.”

People who work outside on hot days sweat and are prone to wipe the sweat off the face with their hands. If the urushiol is on their hands, a rash can soon develop on the person’s face. Collins said some people develop rashes in their groin area after using the bathroom after coming into contact with poison ivy.

Collins said the intensity of the rash no matter where it develops depends on how allergic a person is to poison ivy. According to the American Academy of Dermatology, the rash normally doesn’t appear for 24 to 72 hours after contact with a plant and can spread for several days if a person is seriously allergic to urushiol. According to the Mayo Clinic, the rash caused by poison ivy is not contagious. The only way you can get poison ivy from another person is if you come into contact with any urushiol still on a person or his or her clothing, Mayo says.

If you must handle poison ivy, wear leather gloves and a long shirt and wash your hands in Dawn dishwashing liquid immediately when you go inside your house to get rid of the oils from the poison ivy leaves.

As for treatment if you do get affected, Collins said it depends of the severity of the rash.

“ Over the count e r treatments are to stop the itching,” said Collins. “If you itch, you are going to scratch. If it is bad enough they will need steroid shots or steroid pills.”

Collins learned of a concoction called “love potion” several years ago while trying to find a way to help his wife get relief from itching from a rash caused by poison ivy. The potion contains Calamine lotion, Lidex and phenol menthol. Collins said that after the thin lotion is applied to affected areas it can dry up a rash in a few days. However, Collins said he has seen a couple of cases where it didn’t help.

Over the years word has gotten out that Collins has a wonder cure for reactions to poison ivy and he writes prescriptions for the “love potion” fairly often.

On Saturday, I decided to spruce up the flowerbed in front of my house, and this time I recognized the plants with three dark green, almond shaped leaves growing beside some gladiolas.

I followed the advice of my cousin and let them be — but only for a short time. After spraying them with weed killer, I decided to get rid of the plants by pulling them up. I put on a long-sleeved shirt and a pair of garden gloves and quickly pulled the poison ivy out of the flowerbed. After throwing the gloves away, I washed my hands with Dawn dishwashing liquid and then took a shower.

Thinking back on it, I probably should have taken Dr. Collins’s advice and stayed away altogether. So far, my stubbornness hasn’t earned me another visit to the doctor’s office and a second shot in the backside.