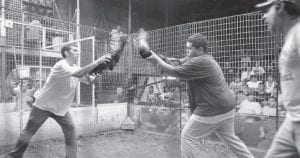 Gamecock handlers flushed their birds under the watchful eye of referee Tracy Mesh, right, moments before they set them down to fight in the main pit recently at the Atchafalaya Game Club in Henderson, La. (AP Photo/The Advocate)

Gory and bucolic all at once, cockfights have drawn crowds to small-time pits and full-blown arenas in towns around Louisiana for generations. By next week, they’ll be against the law. Everywhere.

On Friday, Louisiana will become the last state to outlaw the rooster fights, a move that cockfighting enthusiasts say marks the end of a rich rural tradition.

“The culture, the custom of the Cajun people, it’s gone,” said Chris Daughdrill, who breeds fighting roosters in Loranger (lor-AHN-zher), a community about 50 miles north of New Orleans. “It’s another one of the rights that big government has taken away from the people.”

Maybe so, but supporters and opponents agree that the blood sport won’t be wiped out entirely. Like bootlegging, cockfights will continue on the sly in remote areas, and getting caught could mean fines or even prison.

The fights between specially trained roosters are held in large arenas or in backyards. The birds are fitted with sharp metal blades or curved spikes on their legs, and instinctively attack each other. The match can last over an hour, with one or both animals dead or maimed.

In banning the fights, Louisiana relented after years of pressure from the Humane Society of the United States and other animal rights groups. For those willing to travel, cockfighting remains legal on American soil in Puerto Rico, American Samoa and Guam and is popular in Mexico, the Philippines and other foreign countries.

High-profile defenders of cockfighting in Louisiana began softening their stance of the fights after Hurricane Katrina in 2005, seeking to improve the state’s backwards reputation.

Though the ban on cockfighting takes effect Friday, it has been illegal since last year to gamble on cockfights — a separate law passed last year as a precursor to the total ban. Wagering is part of cockfighting’s appeal, and the threat of state police raids pushed pit owners to close their businesses, Daughdrill said.

“Cockfighting may still be going on with much smaller venues, in the back woods, but my understanding is there hasn’t been any big activity since the gambling ban” took effect, said former lawmaker Art Lentini, who led the push in the Legislature to outlaw rooster fights.

Barras said the gambling ban was the reason for shutting down the Atchafalaya Game Club, a Breaux Bridge pit seating hundreds, that she ran with her husband for more than a decade. She said it wasn’t worth the risk of getting arrested if some of her patrons were caught wagering on the fights.

Congress last year toughened federal animal fighting laws and criminalized commerce in cockfighting weapons — razor-like blades attached to roosters’ legs during fights. Transporting roosters or other animals across state lines for fighting was boosted from a misdemeanor to a felony.

The combination of new federal and state laws has combined to sap Louisiana’s cockfighting industry, which supporters said eliminated what used to be a regular source of business for the state’s hotels, restaurants and feed stores.

Daughdrill, head of the Louisiana Gamefowl Breeders Association, said the number of large, active cockfighting pits has dropped from 20 last year to about six now. Membership in the association — breeders fans and the like — has plummeted roughly 90 percent, from 6,000 last year to 600.

“A lot of people are going to quit. They’re just going to shut down,” Daughdrill said.

Billy Duplechein, who raised fighting roosters as a boy and never stopped attending the fights, said the new law will criminalize a rich, generationsold Cajun tradition.

“I think it’s a loss for us,” said Duplechein, 38, of St. Martinville. “We’re losing out on an opportunity to keep our heritage and our culture.”

There’s reason for him to take heart, however: Daughdrill said he’s attended many illegal cockfights in Alabama, Georgia and Mississippi and expects they’ll be held in Louisiana, too.

“In all these other states,” he said, “I can go up there on any given weekend and go to a rooster fight and it’s wide open — like it’s not against the law.”