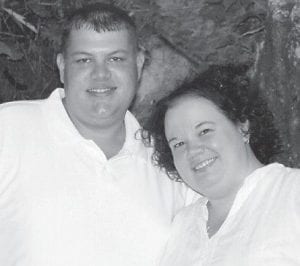 TO BE WED — Mr. and Mrs. Danny Wayne Meece and Mr. and Mrs. Eales Aaron Johnson announce the forthcoming wedding of their children, Tennille Dawn Meece and Aaron Christopher Johnson. The bride-elect is a 1998 graduate of Pulaski County High School in Somerset and is employed by Kentucky Blood Center as supervisor of Donor Services. She is the granddaughter of Wayne and Lillian Meece, the late Gleoria Meece, Helen Hunt, and the late Carlos Hunt, all of Somerset. The bridegroom-elect is a 2003 graduate of Whitesburg High School and a 2008 graduate of Southeast Kentucky Community and Technical College, majoring in radiology. He is employed by Harlan Appalachian Regional Hospital as a radiology technician. He is the grandson of Merrill and Brenda Holbrook of Partridge, and the late Eales and Betty Johnson. The wedding will take place at 5:30 p.m., October 17, at Levi Jackson State Park in London, with a reception following. The custom of an open wedding will be observed and friends and relatives are invited to attend.