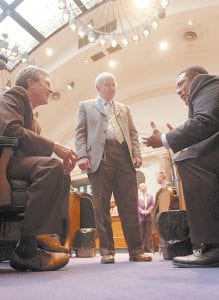 TALKING IT OVER — From left, Rep. Thomas Kerr, R-Taylor Mill, Rep. Ancel Smith, D-Leburn, and Rep. Jim Glenn, D-Owensboro, speak before the start of the day’s legislative session in the Kentucky House of Representatives. Smith represents a portion of Letcher County.

Rep. Hall presented Mosher his and Pike County Judge/Executive Wayne Rutherford’s letters to the Public Service Commission denouncing the proposed rate increase. He also showed Mosher a copy of the recent edition of Platts Coal Trader which reported on AEP’s forecasted 10% projected decline in coal prices on coal which will be purchased by AEP.

“I quoted from the Platts article which said AEP President Michael Morris told Wall Street analysts that for the three months ending December 31, 2009, the Columbus, Ohio, company saw earnings soar by 57% to $238 million, and revenue rose to $3.3 billion from $3.2 billion, a 3% gain,” said Rep. Hall. “I also presented Mosher with a copy of a protest petition signed by 4410 constituents in eastern Kentucky who oppose the rate increase.”

Mosher acknowledged that other businesses such as Walmart and Food City had voiced opposition to the proposed rate increase.

The legislators raised many questions and asked for justification for the increase. “I wanted to know how there could be such an increase when clearly AEP was in strong fiscal shape,” said Rep. Collins.

Mosher explained that the past two winter storms had cost Kentucky Power more than $30 million dollars and that more repairs and tree-cutting were needed.

“We understand that the storms were costly, but many of our folks have already seen increases in their electric bill this year and another one of this size is unacceptable,” said Rep. Smith.

The legislators were also told that the Louisa, Ky., power plant owned and operated by Kentucky Power was at full operating capacity and in need of repairs, maintenance, and costly updates to meet current proposed clean air standards as well as the current federal legislation proposed at cutting carbon emissions.

All four legislators voiced their opposition to the so-called “cap and trade” legislation being considered by Congress. “Coal is what fuels our economy in eastern Kentucky,” said Rep. Edmonds. “We fiercely support the coal industry and are doing what we can to save the very jobs that would be lost with this kind of federal legislation.”

“We have a lot of experience both in the legislature and through our business dealings to understand when something doesn’t smell right,” said Rep. Hall. “And this proposed rate increase just doesn’t pass the smell test.”