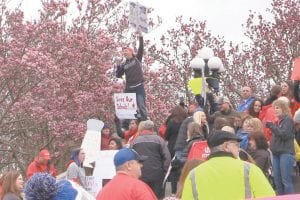 Letcher Elementary School teacher Tyler Watts helped build enthusiasm at Monday’s “We Have Had Enough” teachers rally in Frankfort. Watts was one of about 300 Letcher County educators who traveled to the state capitol to protest pension reform and to show support for better funding for education. (Photo by Chris Anderson)

About 300 school employees from Letcher County joined an estimated 10,000 teachers from across the state in Frankfort earlier this week, angry over the pension bill and determined for lawmakers to hear their voices on education funding.

But if Republican lawmakers thought some additional funding in the new state budget might soften the anger of teachers over pension changes passed last week, they may be rethinking that idea.

“That (education) funding is good but it should never have been threatened, anyway,” said Stephanie Winkler, President of the Kentucky Education Association. “But it doesn’t relieve the feelings about Senate Bill 151” — the pension bill lawmakers passed last week with little prior notice.

School districts across the state closed for the day Monday as teachers flooded the Capitol wearing read shirts and waving signs.

Tony Sergent, Superintendent of Letcher County Schools, said the funding might have saved the retirement system if it was done first, but instead lawmakers waited until the damage was already done before giving any new money.

Teachers are unhappy with the substance of that bill which will place new teachers into hybrid cash balance retirement plans rather than defined benefit plans — something teachers say will make it difficult to recruit future teachers. They aren’t happy either that they won’t in the future be able to count unused sick days to calculate retirement eligibility.

“You sacrifice as a public employee. You don’t get paid that much, but you count on that good retirement,” he said. New teachers won’t have that type of retirement, and no teacher in Kentucky is eligible for Social Security.

While new teachers will get a new retirement plan, current teachers remain under the old pension plan. Sergent said more will retire every year, while fewer work and pay into that old system.

He said if a first-year teacher this year lives to be 90, the teacher could be drawing a pension for more than 30 years, while first year teachers next year will pay nothing into that old system.

“I don’t think they saved any money doing this,” Sergent said. “They just created a mess.”

But teachers are also angry about the “process,” the way Republicans, who control both legislative chambers, passed the measure by attaching it to a wastewater bill at the last minute and with no prior notice.

“People are so fed up with how the process works in Frankfort,” Winkler said. She said that applies as well to how Republicans waited until Monday morning to roll out a budget and a revenue bill which significantly alters the state’s tax code and then scheduled votes on the bills for the same day.

“It would be nice if we could see details of these bills,” Winkler said.

Clearly, lawmakers were watching as teachers descended for weeks on Frankfort, in even greater numbers Monday.

While lawmakers debated the two bills, teachers filled the area on the second floor of the Capitol between the two chambers, shouting “Vote them out! And Shame on you!”

Republicans tried to put the best face they could on things, touting the revenue and budget bills for funding increases for SEEK — the basic funding formula for public schools — and said they heard teachers’ concerns as they crafted the budget. Democrats, on the other hand, said the budget is still inadequate and criticized tax code changes as benefiting corporations and wealthy individuals at the expense of the working class and poor people.

Sen. Morgan McGarvey, D-Louisville, however, said the Republican budget is “politically astute.” He said Republicans are hoping the money they put in the budget for education will prevent teacher and voter backlash when lawmakers face voters next November.

“But I don’t think it will work,” McGarvey said.

“Absolutely, we’ll remember that pension vote,” she said Monday. “We’re still angry, even after they put more in the budget for education. We know we can’t trust them because of their lack of transparency.”

Denise Vanover teaches math at Kingston Elementary in Madison County, but Monday she stood outside the state Senate chambers and said she and her colleagues won’t forget this fall how lawmakers voted on the pension bill.

She doesn’t think teachers will forget their anger when the November elections roll around, either.

With her was Kaye Prather, a fourth-grade math teacher at the same school, who said she’s a single parent, and while the budget funds health insurance for retired teachers until they reach Medicare eligibility at age 65, the state will no longer help pay for dependent coverage.

“I’m a single mom and, when I retire, my children will be in college and they won’t be covered,” Prather said.

She said teachers are grateful the Republican budget puts money back in the budget for things like Family Resource Centers “but my children are also important to me and I want them covered.”