Two-fisted, tender-hearted in the title role of Sarah Connor Chronicles' 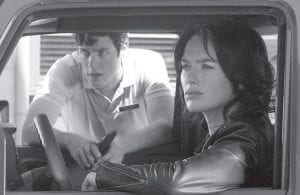 The only complaint Lena Headey can muster about her new series is the title. It doesn’t exactly roll off the tongue. And to make matters worse, she confides that she and her co-stars amuse themselves by adding a lisp when they say it: “The Tharah Connor Chroniclth.”

But by any name, however cumbersome, “Terminator: The Sarah Connor Chronicles” is an absorbing sci-firomp that lets Headey kick some cyborg butt, be a devoted single parent, and play a key role in defending humanity. (It airs Mondays at 9 p.m. EST on Fox.)

Based on the “Terminator” films, “T:TSCC” casts Headey as the strong, sexy mother of the world’s 15-year-old future savior. His destiny is to conquer Skynet, an artificial intelligence gearing up to destroy the human race. But John (Thomas Dekker) will first need to reach manhood, and in the meantime fearsome Terminators have been deployed from the not-so-distant future to nip his mission in the bud.

Luckily, a Terminator cyborg named Cameron (Summer Glau) has been reprogrammed to help John and Sarah fend off their pursuers. Probably not by chance, Cameron’s a dead ringer for a cute teenage girl.

Befitting a sci-fidrama, “The Sarah Connor Chronicles” has souped-up fisticuffs and fantasy, plus the requisite high-tech mumbo jumbo.

“The thing I find hard on the show is the sci-fidialogue,” Headey says. “And I’m crap at it! Thomas can do it brilliantly. He’s very dexterous with his words, and has the capacity to remember terminology I can’t even pronounce.”

Not that she’s complaining.

“I just bring it back down to a human level,” she explains. “The way I approach acting is instinctive. I’m playing a mother who has to protect her son. Like him, she’s in danger every day. You never want to die leaving your child unprepared for the world, and Sarah hasn’t fully prepared John yet.

“That’s a huge issue, a universal issue! And no matter how strong a woman is, that’s her vulnerable spot.”

As a mom under pressure in larger-than-life ways, Headey disappears into the character. Likewise, she is almost unrecognizable from what, until now, was her standout role: as the bold, lustrous Queen Gorgo, wife of King Leonidas, in last year’s hit film, “300.”

The 34-year-old Headey (rhymes with “speedy”) leaves no doubt she’s her own woman. For a recent interview, she is clad not in Sarah’s formfitting jeans and tank top, or the diaphanous robe in which she reigned as the Spartan queen. Instead, she looks a bit of a gamine in her denim overalls, a red-and-white-checked sleeveless blouse and what resemble, but aren’t, a pair of Ugg boots. She is animated and playful, her British accent in full display – yet she demonstrates outspokenness in a near-whisper.

She is also unguarded, more than willing to discuss her bouts with depression that began as a teen growing up in Yorkshire, England.

“I’d come home from school every day and put on my records,” she recalls. “I’m a huge music fan. And I remember one day when I didn’t find any joy from my music. It was the weirdest feeling: putting on the records, and waiting. I thought I was going mad.

“As an adult, the depression has come into my life now and again, but now I know what it is: a very unwelcome old friend who occasionally goes ‘Hey!’ and just ruins your (bloody) party.

“It hasn’t touched me for a while, thank God,” she says. And it never afflicts her when she’s on an acting job.

Headey never really made the choice to be a professional actor.

In childhood, she remembers “watching movies on television and thinking, ‘Doing that would be fantastic.'”

Then, in a school play at 17, she was spotted by a film producer, and made her professional debut in the 1992 drama “Waterland” alongside Jeremy Irons, David Morrissey, Maggie Gyllenhaal and Ethan Hawke. Roles have followed steadily ever since.

Of course, certain acting projects made her rethink her career nondecision (the 2005 adventure fantasy “The Brothers Grimm,” where she clashed with director Terry Gilliam, was notably a low point). “But every time I hate what I’m doing, every time the experience is ugly, then I’ll read something new and think, ‘I HAVE to do this!'”

Still, she does it never expecting or (she insists) even hoping that stardom will be part of the deal.

“I’ve been acting 16 years, and I’ve been called ‘up-andcoming’ and ‘breakthrough’ about 25 times,” says Headey with no evident remorse. “It’s never happened.”

Could it happen with “Sarah Connor”?

“All I hope is that I can retain most of my privacy,” she replies, “and never become the property of those people on the street with lenses.

“I just like doing what I do,” she says, brushing aside the prospect of fame. “But I don’t think I ever tell myself, ‘What you did was good.’ I constantly go, ‘THIS time, it’ll be perfect.’ It’s kind of an addiction. I don’t think you can ever reach a point where you can say, ‘I’m kind of done.'”