Lessons from ‘Dating Around’ 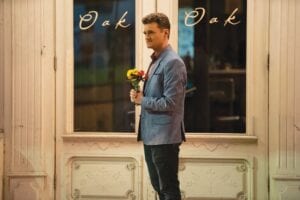 This image released by Netflix shows Ben Samuel in an episode of “Dating Around.” Set in New Orleans for its second season, “Dating Around” features a principle dater each episode who goes on five blind dates. At the end of each episode, a person is chosen for a second date.

Ben Samuel hasn’t had any heart-to-hearts with Chris Harrison or asked dozens of eager women, “Will you accept this rose?” But that hasn’t stopped much of the internet from crowning the “Dating Around” participant as reality TV’s most eligible bachelor.

“It’s been overwhelming,” Samuel says of the attention he’s received from his Netflix episode. “People have said, ‘Seeing you go out there, someone who clearly didn’t necessarily have a lot of dating experience but take that risk, has inspired me to join some dating apps and (try) to put myself out there, too.”

Set in New Orleans for its second season, “Dating Around” features a principle dater each episode who goes on five blind dates. The filming gives the illusion they all take place during one night as the dates cut back and forth through sleek editing. (In reality, the dates occurred throughout the course of about a week with the main dater styled the same way each time.) At the end of each episode, a person is chosen for a second date.

“One of the big things that I am learning because of the show that maybe everybody else learned in high school — but hey, I’m a late bloomer — two people can be totally awesome, totally wonderful, totally incredible. And maybe it just doesn’t work out,” said Samuel, a 36-year-old computer science professor.

The Associated Press talked with Samuel about the authenticity of the series, his current relationship status and how he captured the internet’s heart. Answers may have been edited for clarity and brevity.

AP: Reality dating shows are known to stir up drama. How involved were the producers?

Samuel: Everything that you see is genuine, as it happened…I was genuinely shocked at how faithfully I feel that they recaptured or recreated the feelings of all of those different dates.

AP: Viewers fell in love with your consistent nervousness. Is that really you?

Samuel: I personally feel — and many of my close friends who’ve watched the episode have all agreed — that they did a really good job of capturing my essence. That is who I am…the way that they presented me was very authentic.

AP: You eventually chose Alex, but why were you so emotional after your date with Jaden?

Samuel: The reason why I reacted the way that I did — I say like, “Oh shucks, oh darn. I liked ya,” or whatever I said, that was a reference to something earlier in the date as well where we were talking about ex stories or failed romantic stories. And I mentioned how in my youth, there is a woman that I really loved. And when she said she just wanted to be friends, I did not handle it well. I was really devastated. And I said, “I think modern day Ben would handle it better.”

AP: Are you and Alex together now?

Samuel: No, is the short answer.

AP: What’s the biggest lesson you learned from this experience?

Samuel: All my life, I would allow my own perception of my self-worth to be dictated by people that I had feelings for. Like, ‘Oh, I have a crush on you, you don’t feel the same way — there must be something wrong with me.’… Recognizing now, nope, it sucks if one person is more excited about the relationship than the other, it hurts a lot. But it doesn’t necessarily mean, in fact, it probably doesn’t mean, that there’s something fundamentally wrong with you that makes you undeserving of love.

Samuel: There are some people that have reached out to me — people from around the world (laughs). And this is maybe another example of a growth moment for me. Normally, I think I would be like, “This is crazy. You don’t know who I am. You saw 30-minute edited version of me.” … But because of my experience on the show, I think my openness to new experiences is maybe expanding a little. And like, it doesn’t hurt to just chat.

AP: Would it be fair to say you’re single and kind of willing to mingle?

Samuel: I think single and “kind of willing to mingle” is maybe the best way to describe me that I’ve ever heard.