Let Lindsay Lohan be example for your teen 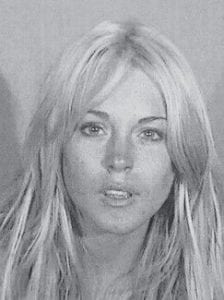 We all know her, the girl who just like Lindsay Lohan seemed to go overnight from good girl to bad.

She moved from playing with Barbies to sneaking a cigarette, a beer and a French kiss, just like a lot of us once did. Except she didn’t stop there.

For me, back in the 1970s, it was a friend who eventually took off with a long-haired guy on a motorcycle for parts unknown.

For my daughter it was a friend who became the subject of my daughter’s 2001 college entrance essay.

“It is 3:30 in the morning. An hour ago I was startled from sleep by a phone call,” from a friend, she wrote. “Under the influence of some substance or other, she asked me to pick her up. So my mother and I have been waiting in the parking lot at 7-Eleven for over an hour.”

It’s normal for girls to experiment, according to Boston-based family therapist Carleton Kendrick. But spiraling out of control is another thing, and parents have the challenge of knowing the difference.

Actress Lohan, who recently turned 21, was arrested and released on bail last week for investigation of misdemeanor driving under the influence and with a suspended license. She was also charged with felony cocaine possession. (She has said the cocaine was not hers). Less than two weeks earlier she completed her second trip to rehab.

Kendrick, who co-wrote “Take Out Your Nose Ring, Honey, We’re Going to Grandma’s” (Unlimited Publishing) said there are lessons to be learned from the Lohan affair even when it comes to non-celebrity kids.

“An adolescent girl’s job is to ride the roller coaster. Risky behavior is part of frankly what should be happening during adolescence,” Kendrick said. “But kids tend not to spiral all of a sudden. It (Lohan’s downfall) started at a particular level and got worse. And one would hope parents would be paying enough attention and know their children to spot the signs before they were on a DUI.”

Nationally recognized psychologist Dr. Susan Bartell said the lesson here for parents is to communicate with your kids – long before there may be a problem.

“Know who their friends are. Stay on top of them. Keep talking to them. Have all the kids over at your house,” Bartell said. “In adolescence the hard work begins.”

She said parents shouldn’t give kids enough rope to hang themselves, but they also shouldn’t be too strict or the kids will rebel.

“You have to have a balance,” Bartell said. “Know what’s going on with your kid. Push them. Empathize with them. Feel your kids’ pain.”

Kendrick suggested parents talk to their kids about the “troubled trio” that is Lohan, Paris Hilton and Britney Spears.

“Don’t lynch them. See it as sad. And the conversation should not be, ‘If you do that you’ll end up like that girl.’ It should be, ‘Why do you think these young women are acting so self destructively?’ You shouldn’t tear down someone your daughter admires,” Kendrick suggested.

Bartell said the unnamed victim of bad behavior is often the bad girl’s friends, who may not only be faced with being dragged along into dangerous situations but also forced to decide whether or not to tell an adult about their friend’s problems.

My own daughter struggled with that issue.

“Over an hour in the 7-Eleven parking lot and (my friend) still hasn’t shown up. I pick up my cell phone and call her parents, no longer worrying about being a bad friend,” my daughter wrote.

“It’s like the other side people don’t really see,” Bartell said, adding that she has treated girls “in mourning” over losing their best friend.

But Bartell said even if in an anonymously written letter, she encourages girls with a friend who is getting out of control to tell an adult.

“Otherwise, if something bad happens to the kid you will feel very guilty you didn’t tell,” Bartell said.

In the case of my daughter’s friend, things are OK. She’s on a better track- we’re not expecting to see her mugshot like Lohan’s on the evening news.

And the two of them, even now adults in their early 20s, are still friends.

Fran Golden is a writer for The Associated Press.