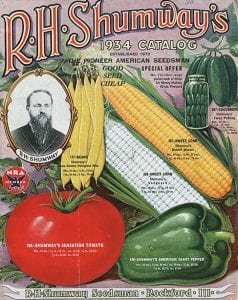 I recall the days when seed catalogs came in the mail nearly every postal day during the month of February. A few of them jumped the gun and did their mailings in January, but the seed suppliers generally waited until they figured potential customers were itching to get into their gardens before they sent out their offerings. A few even waited until early March when they figured you were ready to get serious about gardening.

When I was growing up on Blair Branch, seed catalogs started arriving just in time to replace last year’s Sears and Roebuck, Spiegel, and Montgomery Ward mail order catalogs as the outhouse substitutes for Charmin. But my how times have changed. I’ve been getting 2018 seed catalogs in the mail since back in September and I’ve already lost or tossed at least three that I wanted to mention this week.

A few readers may recall that back in the 1980s, when my kids were younger than most of their own kids are now, I ran a service in a column I was writing for the London Sentinel Echo that we called “The Great Seed, Sporting Goods, and Risqué Underwear Catalogue Scam.” We called it a “scam” even though it was a very legitimate and fun little project that kept the kids busy during those snow days that canceled school. I offered in the column to put readers’ names on a mailing list and send that list out to at least 30 companies that published such catalogs. All you had to do was send me your address and whatever postage stamp was required to mail a letter. The only scam involved was the kids’ notion they were getting away with mischief.

Before the children outgrew it, we were accustomed to having upwards of 400 names on the list every year. Postage increased at least three times before I finally ran out of the surplus stamps we accumulated. I recall one year we mailed Christmas cards using two stamps on each card, which was quite a bit more than necessary R.H. Shumway’s began selling seeds in1870 and is Ike’s favorite. This catalog is from 1934. but was the only way the stamps were ever going to be used. For years after we stopped doing it, readers would either write or call wanting to know when the “seed scam” was going to start. On a couple of occasions — after I explained that my help had moved on to more interesting endeavors — I had readers offer to drive from London to Paint Lick to help get the mailing out.

Nowadays you don’t need a stamp to get seed catalogs in the mail. You can subscribe online and most of the catalogs will be sent to you absolutely free for the asking. If you don’t have a computer, I can’t imagine that you don’t have a friend who does and they really aren’t much of a friend if they are unwilling to spend less than the five minutes it takes to order some catalogs for you. But you’d better do it fast, because we found out last year that most companies stop mailing them out in mid-December.

Here’s a list of some that I can’t seem to live without, not just for their products but for their expert growing tips and advice: R.H. Shumway Seedsman is easily my favorite and where I found the Lazy Wife fall bean (they call ’em Lazy Housewife) seeds that we’d lost over 40 years ago and fell in love with all over again in 2017. Totally Tomatoes has well over 200 tomato and pepper varieties that you can’t find elsewhere. K. Van Bourgondien & Sons has the best and best priced selection of Dutch bulbs, lilies and other perennials I’ve seen. The Vermont Bean Seed Company Catalog has an incredible offering of hard-to-find bean seeds. The Pinetree Garden Seeds Catalog is worth the effort just for the photos, as is the Johnny’s Selected Seeds Catalog, the Territorial Seed Company Catalog and the Burpee Catalog. I’ve ordered from these and numerous others and I personally vouch for their excellent service and customer satisfaction.

Seed company mail ordering is a multi-billion dollar industry. Just type seed catalogs into your search engine and you can stay busy the rest of the day. I’ve gotten to the point that seed catalogs are about the only things that get me through the winter.

Columnist Ike Adams is a native of Blair Branch in Letcher County.