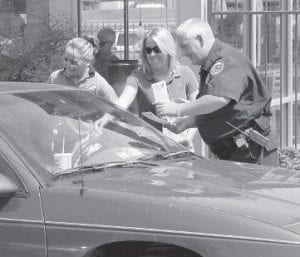 CLICK IT OR TICKET – Letcher County Sheriff’s Deputy Crystal Davis (pictured left) , Megan Pigman, a summer employee of the sheriff’s department, and Whitesburg Police Officer Philip Slone handed out seatbelt information as well as ink pens, notepads and key chains at the Whitesburg McDonald’s on Monday as part of the “Click It or Ticket” campaign.

Letcher County has the seventh worst safety belt usage rate in Kentucky. According to the Kentucky Transportation Cabinet, 52 percent of Letcher County residents buckled up in 2007, with the state average being 72 percent.

Only 35.8 percent of Letcher County residents wore seatbelts in 2005.

The sheriff’s department and the Whitesburg Police Department handed out seatbelt information cards, ink pens and key chains at the Whitesburg McDonald’s on Monday trying to encourage people to wear seatbelts.

Now through June 1 police will conduct traffic checkpoints and will be cracking down on drivers and passengers who are not wearing seatbelts. Those not buckled up will get a citation.

Last year there were 127,592 vehicle wrecks in Kentucky with 41,148 injuries and 864 fatalities, according to the Kentucky Office of Highway Safety. More than half of those killed were not wearing seatbelts.